To use our software, you'll need to have at least one license for Design F/X, Planting F/X, or Irrigation F/X checked out. Although you can install the same license on multiple computers, a single license can only be in use on one computer at a time.

If you move your Design F/X, Planting F/X, or Irrigation F/X installation to another computer – or if someone else needs to use the same license on another computer – the license will need to be moved using the License Manager screen. If your office is running our software on a central server, your licenses can actually live on that server, and users will be able to check them out (and in) as needed – also using the License Manager. The same goes for cloud licensing.

Although the licensing setup may seem complex at first, checking out a license is a quick and easy process.

Your office will need to purchase the same number of licenses as the number of employees who will be using the software at a time. So, for example, if your office wants five designers to be able to use Planting F/X at a time, you'll need five Planting F/X licenses (along with five installations of AutoCAD or F/X CAD).

We recommend purchasing as many licenses as you have designers who might be using the software. That way, you won't have to deal with time conflicts resulting from multiple designers needing to use the software at any given time. It's a reality you'll face with any licensed software.

For general information on our licensing system – including the types of licenses we offer, and a description of what "licensing" actually refers to in relation to our software – see our Land F/X Licensing Explained page.

Accessing the License Manager Screen from the General Preferences

or type *FXPreferences in the Command line

In the General Preferences screen, click the Licenses button to open the License Manager. 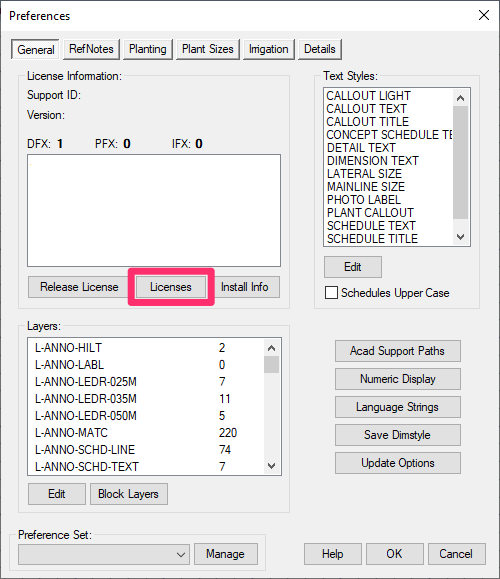 In the top right corner of the License Manager screen, you'll see the total number of Design F/X, Planting F/X, and Irrigation F/X licenses that are currently installed in your office. 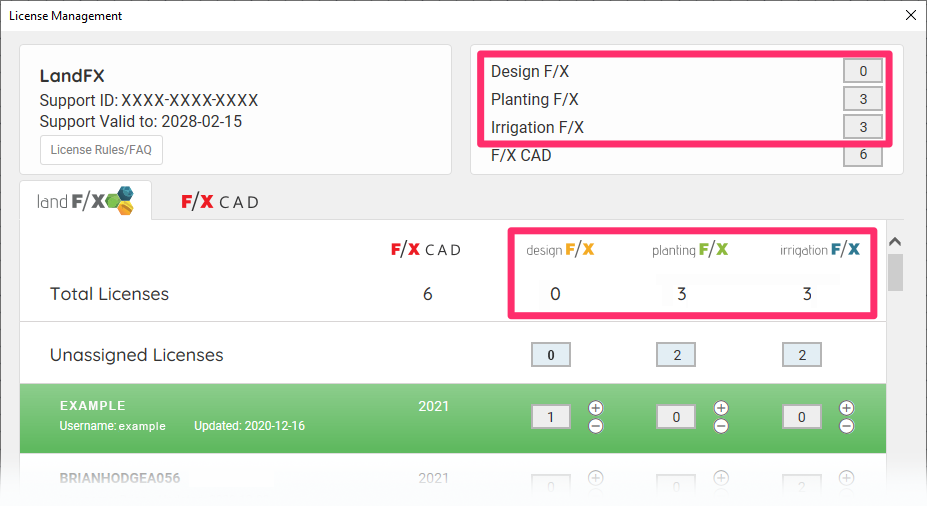 Need to find your office's Support ID? It's listed under your company name. 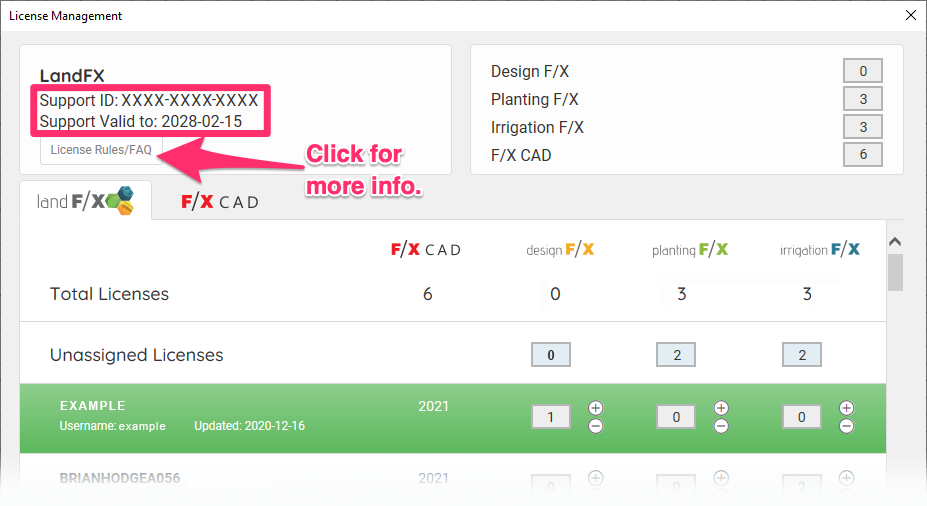 The Unassigned Licenses line lists the number of licenses of each of our plugins that are installed but are not currently assigned to a user in your office. If one or more licenses are currently unassigned, a user who needs to check out a license is free to use any of those unassigned licenses. The office in the example below currently has one unassigned license for Planting F/X and Irrigation F/X. 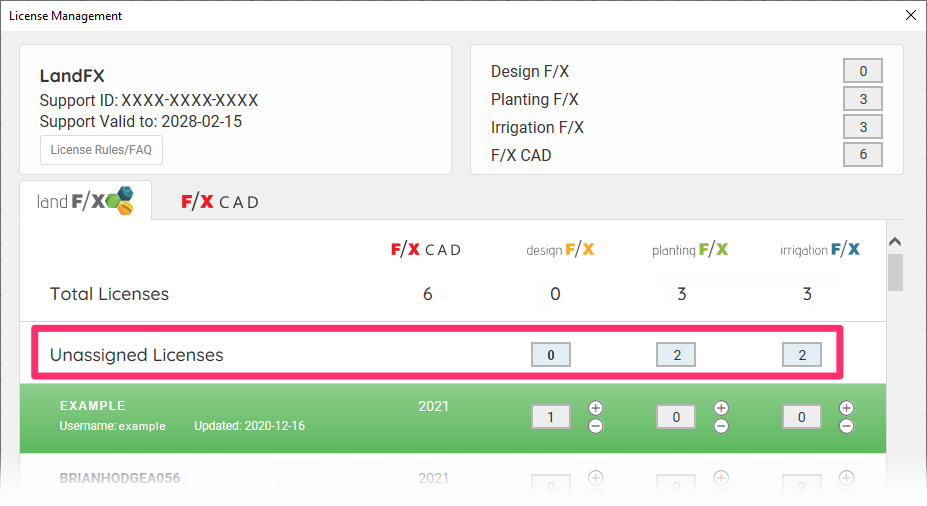 License(s) Currently Assigned to Individual Computers in Your Office

Your computer (or the computer you're using to view the License Manager screen) will be listed at the top of the Installed Licenses and designated as the current installation. You'll see the number of licenses of each of our plugins you currently have checked out. In this example, the current user has one Irrigation F/X license checked out. The plus (+) and minus (-) signs allow you to check licenses out and check licenses in. 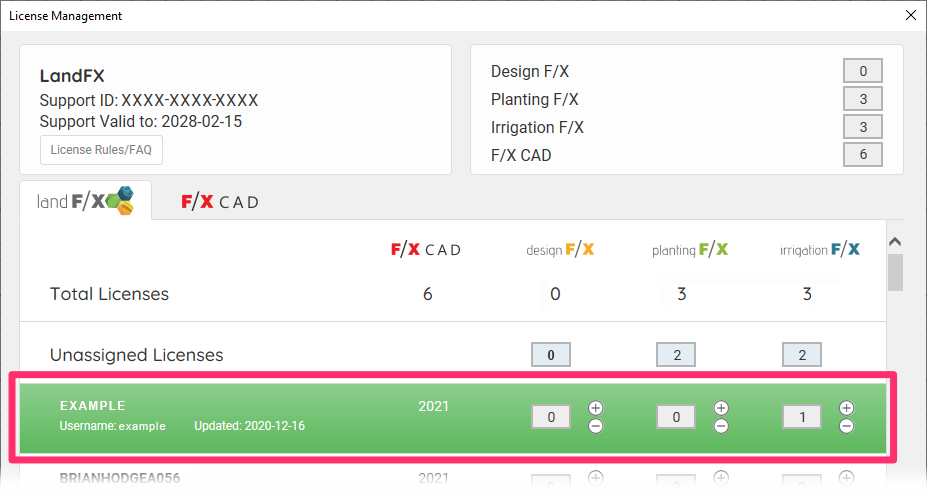 The computers belonging to other users in your office with licenses currently installed will be listed below your computer. These entries can be helpful when you need to check out a license but you don't see any unassigned licenses to check out. 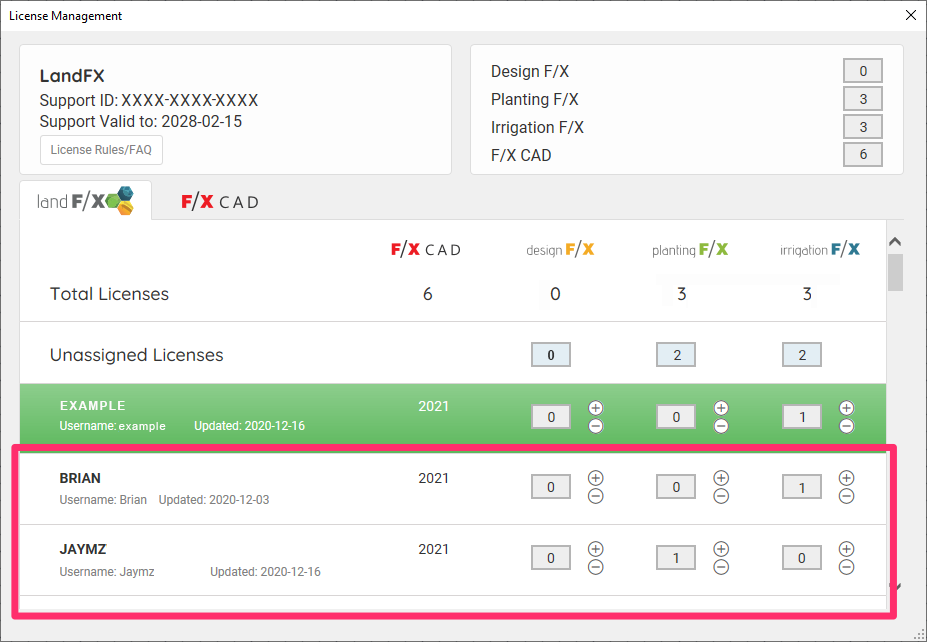 If you only have one license, you'll only see your computer in this list, unless you've installed your license on additional computers, such as a laptop or your home computer. In that case, you'll see those computers listed here as well.

Checking Out and Releasing Licenses

Most of the time, you won't have to worry about managing your licenses manually (checking them in and out). If your office has the same number of licenses as it has users who need to design using those licenses – and our plugins are installed correctly – everyone should be able to just open CAD and start using our tools.

You'll only need to check licenses in and out if:

Managing your licenses manually consists of two sets of steps:

Checking Out a License

As long as you see one or more licenses designated as Unassigned for the plugin you need to use, you can simply check out a license of that plugin. 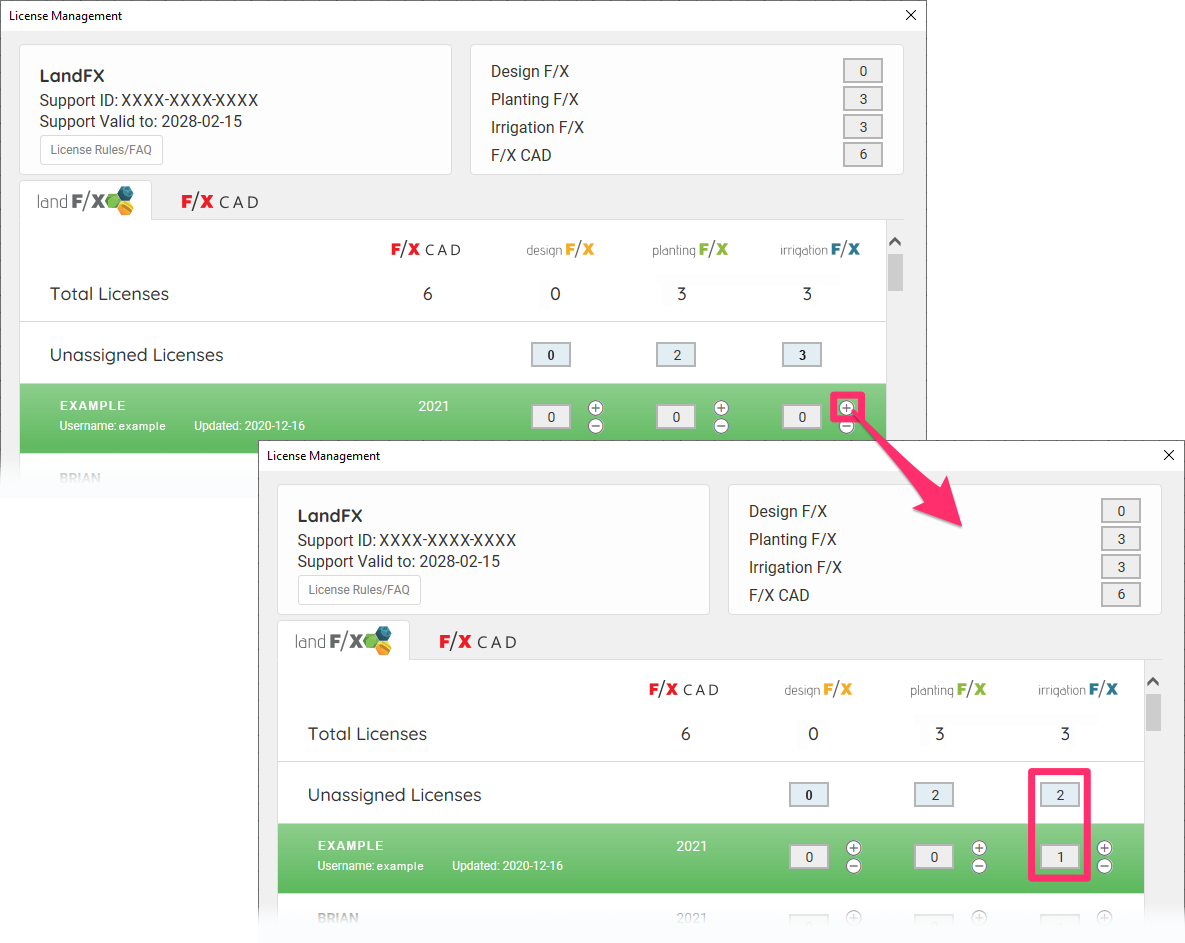 Note also that the number of unassigned Irrigation F/X licenses goes from 1 to 0 now that we've checked out the only unassigned license. 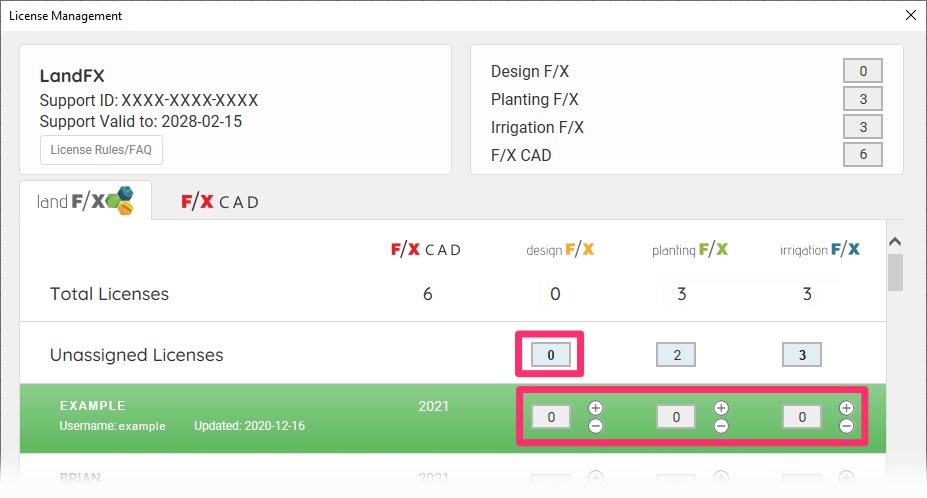 As an alternative, note that the office does have 1 unassigned license of both Planting F/X and Irrigation F/X. In this case, the user could check out one of those licenses, since both of those plugins include all the functionality of Design F/X. However, checking out one of those licenses would also mean that other users who need to check out one of those plugins will then be unable to do so. The best way to deal with this situation would be to communicate with your co-workers and find out who needs the irrigation tools, who only needs the planting tools, and who can get away with only using the details and admin tools (Design F/X).

If you have a license checked out that someone else in your office needs to use, you'll need to check that license back in, or release that license. 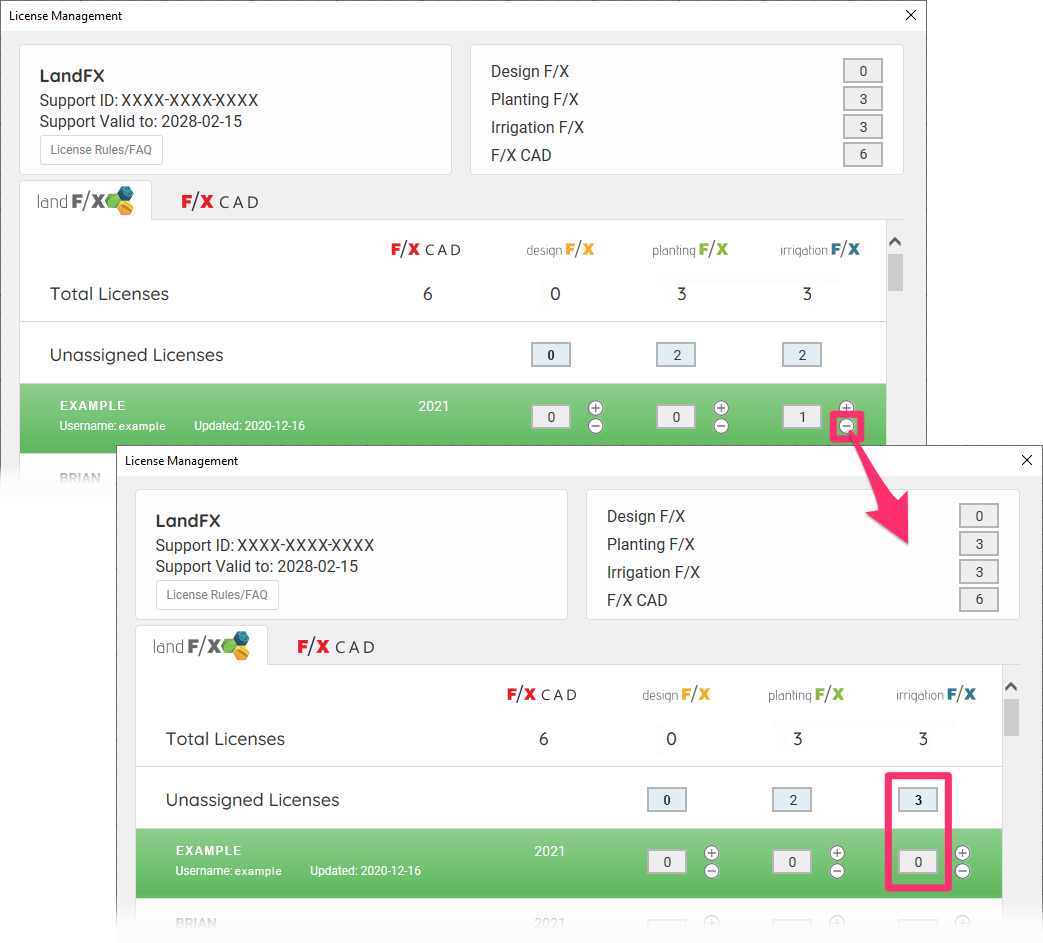 Unable to release a license? Here's what to do.

Once you've made a license available, another user can then follow our steps to check that license out.

If one of your co-workers currently has a license checked out and you need to use that license, you can check that license in by scrolling down to that co-worker's computer and clicking the minus (-) sign for the license you need. In the example below, the current user needs to check out a license of Irrigation F/X, but there aren't any unassigned Irrigation F/X licenses. In this case, you could scroll down to the computer of a co-worker who has that license checked out and may be able to spare it. 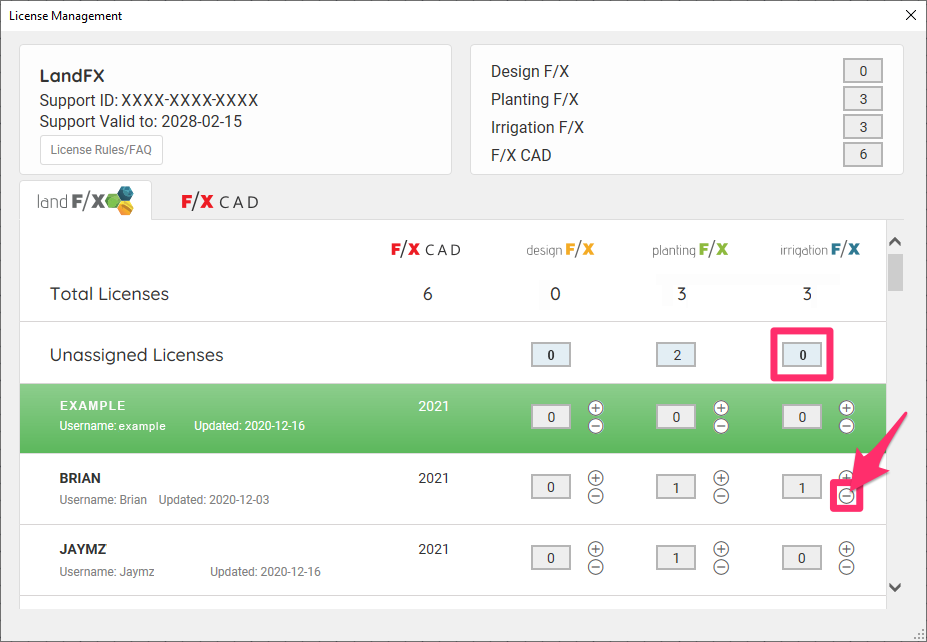 It's always a good idea to communicate with your co-workers if this type of situation comes up.

You may also need to move a license from one computer to another if you're a sole proprietor or if you're sharing a license with a co-worker. In those cases, you'd just check the license in on one computer and then check it out from the other.

Cloud licensing simplifies the process of checking licenses in and out. It's not for every firm, however. For detailed information on Cloud licensing, see our documentation on:

How to Find Out Whether You Have Cloud or Local Licensing

Not sure which type of licensing your office has? You can find out by clicking the Installation and Server Info button in the General Preferences screen.

The Install Info dialog box will open (see images below). Here, you can determine which type of licensing you have. 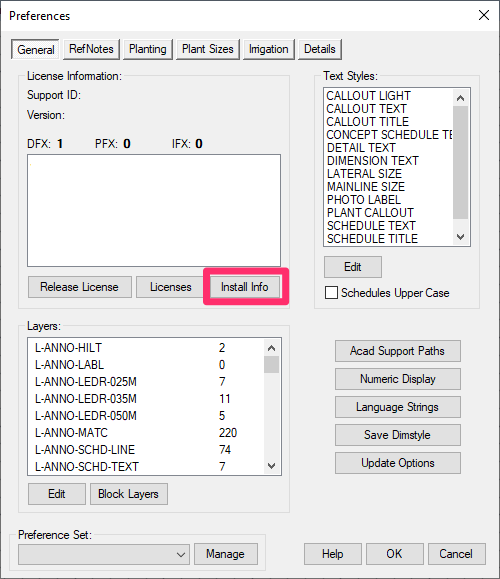 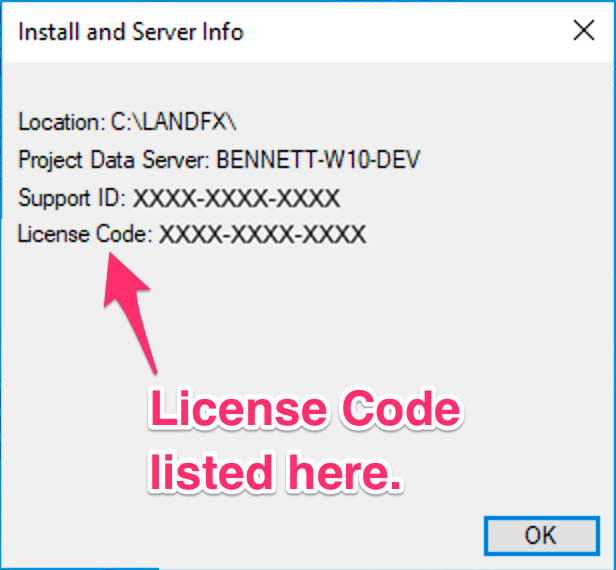 If you see a License Code listed here, you have Cloud Licensing.

Cloud Licensing and Cloud Data go hand in hand. See our Cloud page to learn about our Cloud setup and why we recommend it. 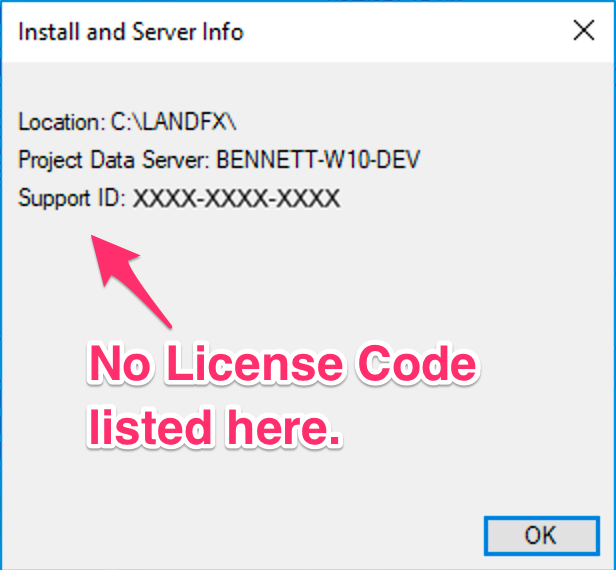 If you don't see a License Code listed here, you have Local Licensing.

Removing a Computer From the License Manager (System Admins Only)

If you have Local Licensing, you'll see an X next to the name of each computer in your network. To remove a computer from the License Manager, click the X next its name.

Only your office's system administrator should remove computers from the License Manager.

Adding a Computer Back to the License Manager

If you accidentally removed your machine from the license management list and need to re-add it, type REACTIVATE in the Command line and press Enter.

Follow the onscreen prompt, verifying that the Support ID is accurate. The machine will be added back to the License Manager.

The F/X CAD Installs section lists the following information for each computer in your office with F/X CAD installed:

The Request Code and Activation Code are unique to each F/X CAD installation. You'll need this information if you need to reinstall or reactivate F/X CAD on your computer.

Saving Your Changes (Local Licensing Only)

If you have Local Licensing, you'll need to click the Save License Changes button in the top right corner of the License Management dialog box to save any changes you've made. 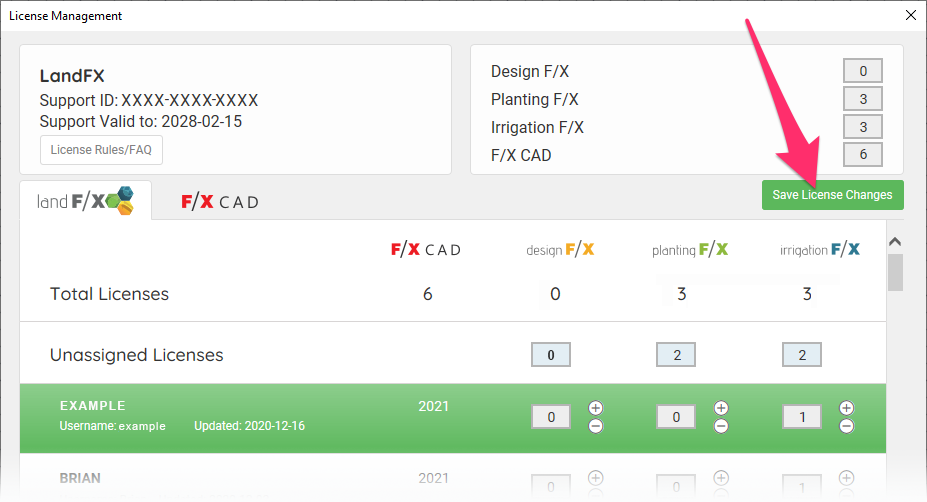 Cloud Licensing installations won't have this button. If you have a Cloud setup, you can just close the dialog box when finished making your chnges.

Issue: The License Manager is not allowing you to assign licenses or save changes

Issue: The question mark (?) icon near the top of the License Manager is showing up as a broken or missing image

Issue: You received the error message "All of your licenses are currently in use"

Issue: You received the error message "There Is a license mismatch for this installation"

Issue: CAD freezes or crashes when you try to access the License Manager

Issue: You are unable to release a license

Previous Article:
Switch to (or from) the Ribbons