In response to requests from several users of our software, we've engineered the ability to make specific projects Read-Only.

Once a project is designated as Read-Only, it will operate differently across the entire software, with dialog boxes graying out any possible changes to that project.

People in your office who open a Read-Only project will be able to perform certain functions – such as placing and labeling plants – but won't be able to edit the project itself. For example, you can safely have a new hire or intern open a drawing associated with a Read-Only project without the threat of items such as plants or Reference Notes (RefNotes) being added to or deleted from that project.

Our utility to back up projects will now also back up your Read-Only projects. Just select the Backup all projects and Preferences option.

Make a Project Read-Only for Everyone in Your Network

You can make a project Read-Only for every user in your network using either our Project Manager or Projects tool.

When your office makes a project Read-Only, we recommend editing the names of the project folder and its detail folder names to include some text designating them as Read-Only.

Once you've set the current project, the Project Manager option on this menu will change to the name of the project, as pictured to the right.

or type ProjectManager in the Command line

To make a project Read-Only, select the Read-Only option in the Project Manager dialog box. 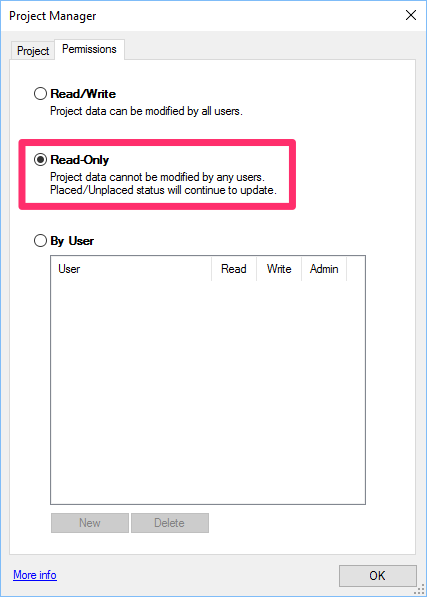 First, open the DWG file (drawing) associated with the project you want to mark as Read-Only.

Then open our Projects tool:

or type FX_ProjectFiles in the Command line

Highlight the project you want to mark as Read-Only.

To verify that the project is set to the drawing you have open, click Open.

You'll see the Project Manager open. Close it and open the Land F/X Projects dialog box again, as described above. 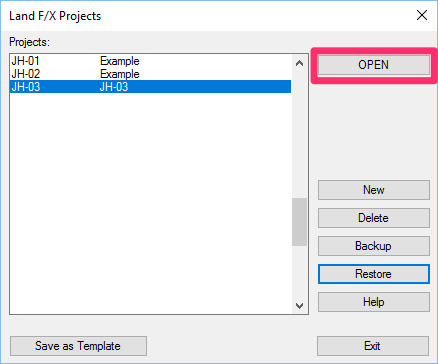 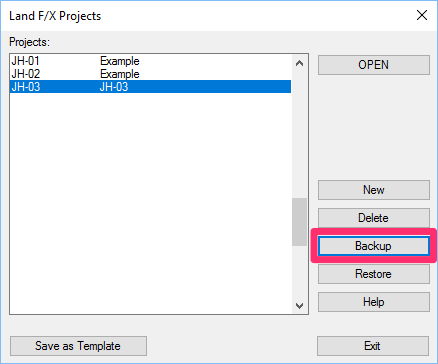 Highlight the project you want to mark as Read-Only, and click Backup.

This feature also allows you to back up your project data. For more information, see our Back Up Projects ;page. 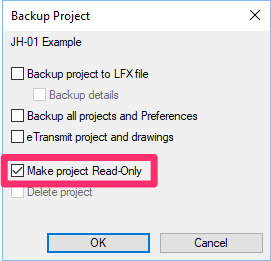 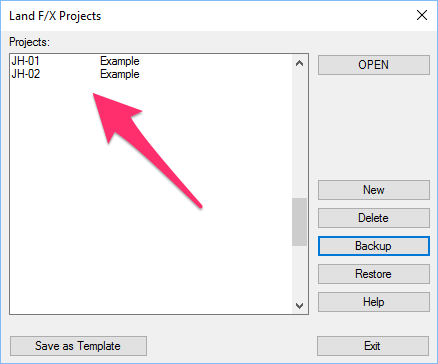 The project will be marked as Read-Only and will be deleted from your list of active projects.

Don't worry – the project isn't deleted. It's just sitting in a kind of limbo where it still exists, but it's not accessible from the Land F/X Projects dialog box.

If you don't see the project in the list anymore, you've successfully designated it as Read-Only.

Where Does the Read-Only Project Go?

Although you won't see the Read-Only project in your list of active projects, it will still exist. When you make a project Read-Only, an automatic backup copy of that project will be created in the folder LandFX/data/backup/(today's date). 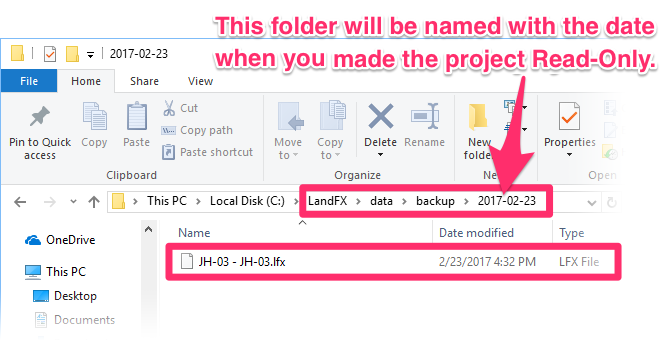 What Happens When a Project is Read-Only

When a project is designated as Read-Only, options to edit that project will be grayed out in various dialog boxes across the software.

For example, the Plant Manager will have the following options grayed out and inactive:

Users will still be able to click the following features: 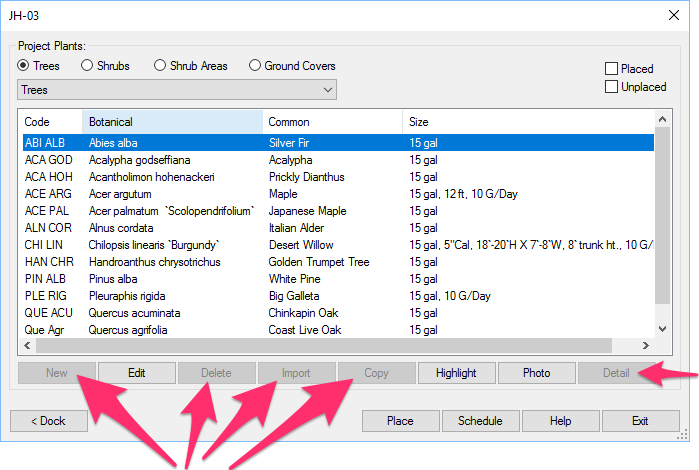 Users will still be able to click Edit to open the Plant Info dialog box and view all the information assigned to the plant.

However, all editing options in this dialog box will be inactive. Users won't be able to edit text in any text fields, change any menu options, or change the 2D, color, or SketchUp plant symbol.

If you try to base a project template on a Read-Only project, the template won't pull the data from the project. Before you can create a template based on a project, you'll need to have Read-Write permission on that project.

All Manager dialog boxes across the software will also have their options grayed out, including:

If a project in your office is marked as Read-Only, there's a good chance that it's designated that way for a reason. Check with your department head or CAD manager before activating a Read-Only project.

Activating a project takes away Read-Only status and allows users in your office to once again make changes to that project. 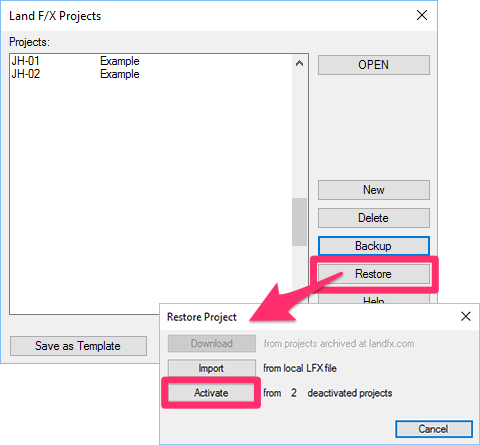 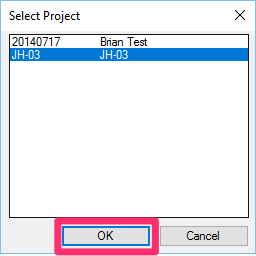 In the Select Project dialog box, select the project you want to activate.

The project will be activated and will once again be available in your list of projects. 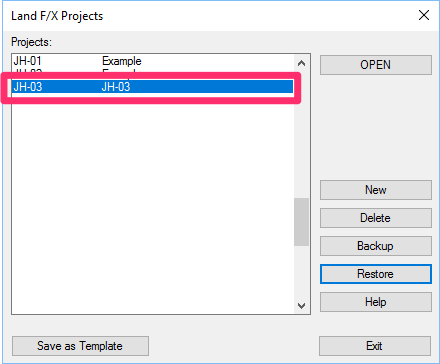 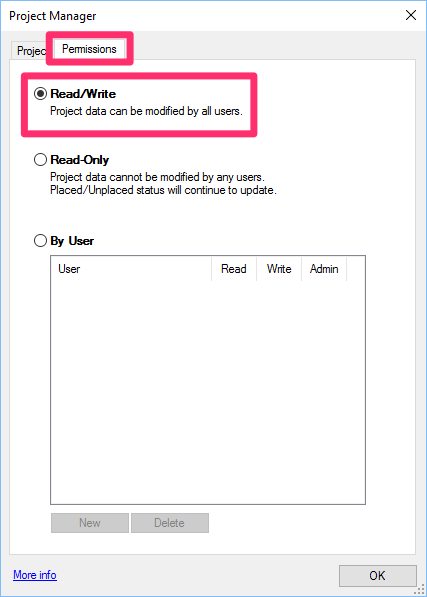 Once you select that project from the projects list, open the Project Manager.

Select the Permissions tab, and ensure that you have Read/Write permission for that project.

Once a project is activated, the buttons in the Manager dialog boxes will all be available, and none will be grayed out (as pictured in the Plant Manager to the left).

As a result, you'll be able to make changes to the project.

We've also engineered the ability to make a project Read-Only for only specific users in your network.

To do so, select the By User option.

You'll see a list of all Land F/X users in your office and three columns of checkboxes: Read, Write, and Admin.

Note that you'll need to have Admin status for this project in order to make changes to its permissions.

To prevent a user from making changes to the project, uncheck the box in the Write column next to his or her name.

Be careful. If you set a project to By User and then configure the settings for one or more users, those user-specific settings will be deleted if you then set the project to Read/Write or Read-Only. 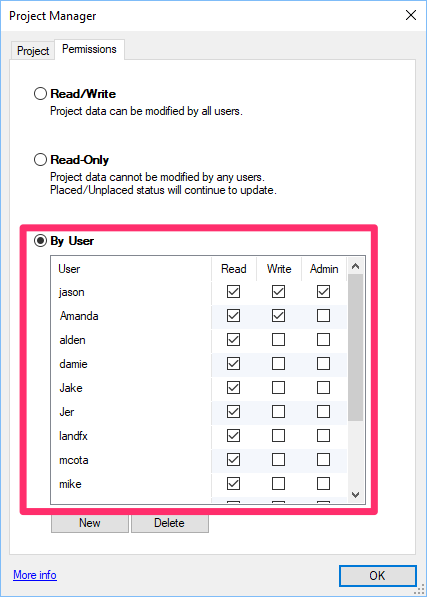 You can also add and take away other users' Admin status using the boxes in the Admin column – as long as you are an Admin on the project.

To do so, open the Project Manager and select the By User option. (Make sure you have the correct project open.)

You'll then see a list of users in your network.

Note that you can only change a user's statue on a project if you are a designated Admin on that project. The first person to open a project will automatically become an administrator (admin).

Once you are an administrator, you can designate other users in your network as other administrators for that project.

To make a project Read-Only for a specific user, uncheck the Write option next to that user's name. That user will now only be able to see the project as Read-Only and will have several buttons grayed out in various dialog boxes.

To give that user write permissions again, open the Project Manager again and check the Write box next to that user's name.

Can't remove a user as administrator because that user is no longer at your firm, or you no longer have his or her computer? Here's what to do. 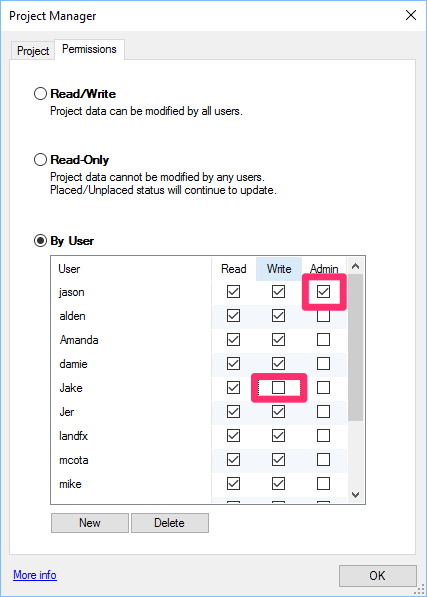 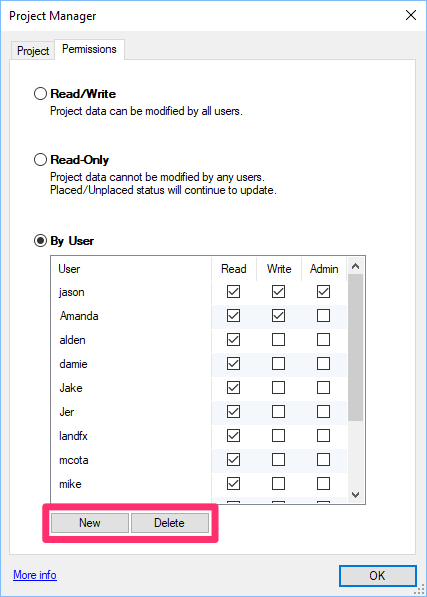 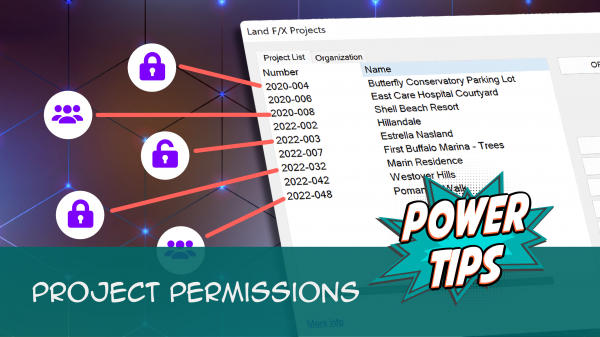 We've built an interface for setting project and Preference Set permissions into the Land F/X Portal, where you can adjust the settings on a per-user basis, create user groups to manage the permissions much more easily, and even apply permissions to multiple projects at once.

See our documentation on setting permissions in the Land F/X Portal for information and instructions.

Issue: You are unable to remove a user as the administrator of a project because that user is no longer at your firm, or you no longer have his or her computer

Issue: You received a "You can not modify templates or deactivated projects" error message when attempting to restore a project

Issue: A new Land F/X user in your office has been added to permissions on existing projects, but when that employee creates a new project based on a template, they are missing from the permissions list