Adding Other Equipment to a Schematic Drawing (Optional) 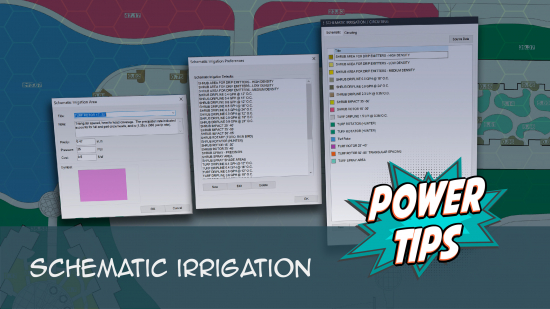 You can use Schematic Irrigation to represent your heads and their estimated demand. If you wish, you can place other equipment such as valves, points of connection (POCs), backflow devices, and irrigation controllers, as well as lateral and mainline pipe, into your design. Essentially, you can create a virtually complete irrigation plan with all equipment, sized mainline, and a complete understanding of the requirements of the entire system – all without laying out a single head.

or type GPMCalc in the Command line

The Circuit dialog box will open.

The Flow Total is designed to be placed somewhere within your Model Space layout. 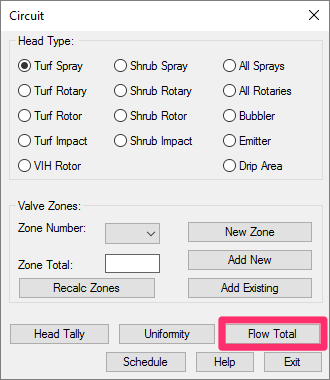 Here's an example of a Flow Total placed in a drawing for example Schematic Irrigation areas: 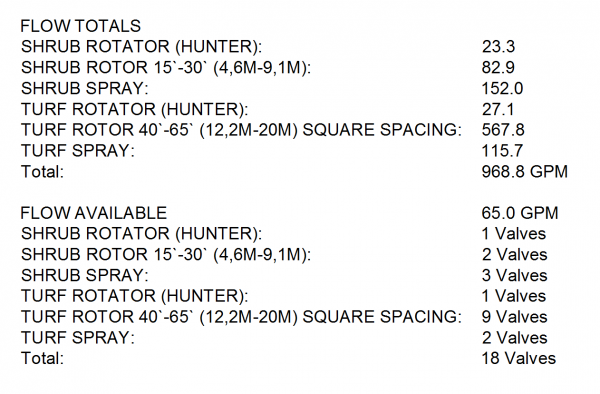 In this case, we have about 1,000 gpm (3,785 l/m) and a water meter source that will result in a minimum of 18 valves. After increasing that total by one-third to account for possible underestimation, you can anticipate about 24 valves. This is a reasonable number of valves. Therefore, a 1.5-inch water meter seems reasonable for the project.

Add the backflow device of your choice to the project, and you can place both items into the drawing.

After you place the POC, a layer will become active for the initial mainline layout. This step is optional, but you can draw your initial sketch of the mainline layout on this layer.

The layer containing the initial mainline layout will be non-plot by default.

Choose the type of valve you wish to operate your system, and add it to your project. For more information on this subject, visit our Adding Valves to a Project documentation page. You may need to look at the manufacturer’s performance data to determine the maximum flow for a given size for this type of valve.

To connect a valve to a particular Schematic Irrigation area, you can simply place that valve within that area. Placing a valve into a Schematic Irrigation area will connect all of that area to the valve. If more than one valve is appropriate for an area, as in a sports field, you can place multiple valves within area. The flow for the area will be divided between the number of valves placed within it.

In previous versions of Irrigation F/X, you would have been required to dead-end a lateral pipe from a valve to a Schematic area for the valve to be recognized as piped to that area. We've since engineered Schematic areas with the ability to connect automatically with valves placed within them. If you've placed a valve within a Schematic area but that area doesn't seem to be recognizing the valve, you may need to update to the latest version.

We'll illustrate the capabilities of this updated feature with an example where we've placed four valves into one Schematic area.

As pictured below, the four valves placed in one area will automatically split the flow evenly – even when not piped with a lateral line. 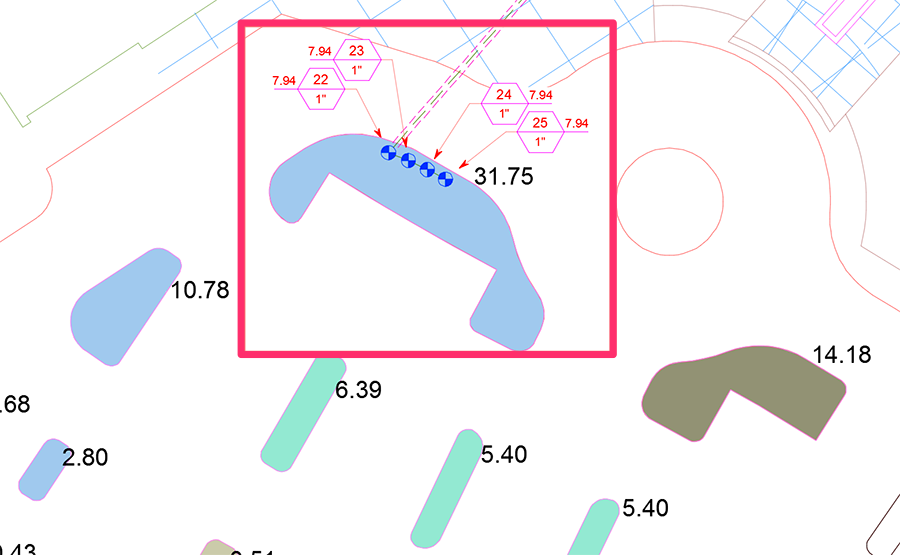 You can then run lateral pipe from the valves within one Schematic area to other areas as needed.

In the scenario pictured below, we've drawn lateral pipe between two of the four valves and additional areas. Note that the flow to the four valves has been updated in respect to where they are now piped. 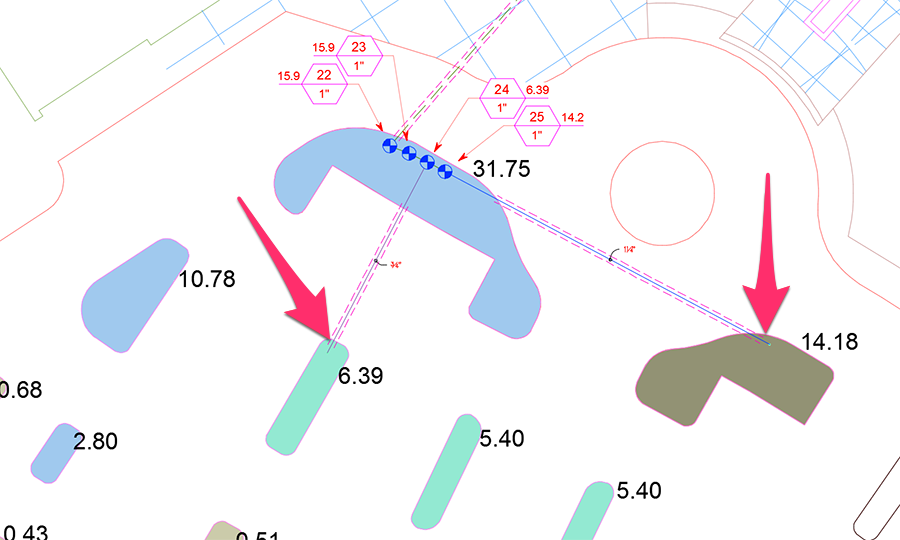 Finally, in the example below, we've now piped from three of our four valves to other areas, leaving only one valve unpiped but still reading the appropriate flow for the area – even when one of the valves is piped to multiple areas. 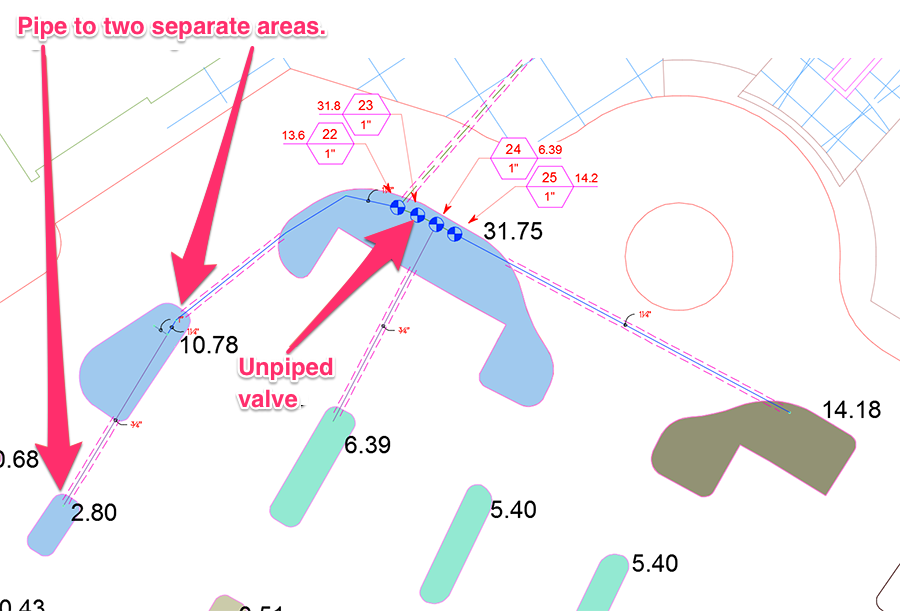 If you're working on a small area with minor flow, you can tee off from the pipe going into that area and pipe, from this valve to other areas as required. Thus, several small areas may be attached to one valve. 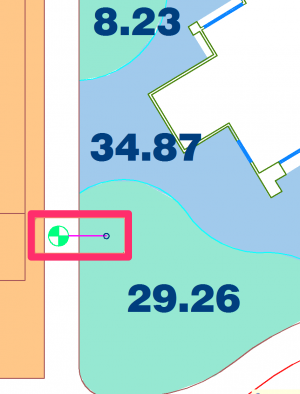 Pipe from valve to Schematic Area 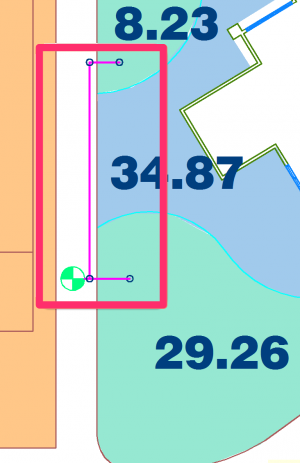 In the example shown above, a valve is piped into, and dead-ends within, a Schematic Irrigation area with 29.26 gpm of flow. This valve will now register that amount of flow.

If you want the valve connected to more than one Schematic Irrigation area, do not continue from the dead-end above. Instead, “tee” into the pipe, leaving the valve similar to the image above.

The flow to this valve from the two areas is now 29.26 + 8.23, or 37.49 gpm. When lateral piping to a Schematic Irrigation area, just dead-end into it to pipe to that area. When piping to two different areas, you need to “tee” into the first line and also dead-end into that area, so both areas have dead-end piping into them, as shown above.

DO NOT pipe into an area and then continue on to another area.

The first area would not be counted, as you did not dead-end into it. 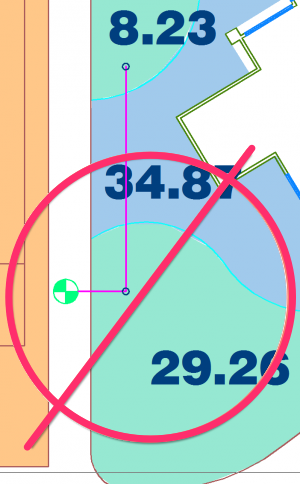 We recommend using our Highlight Station tool to verify which pipes, equipment, and Schematic areas are connected to a specific valve. In the image above, for example, the valve will only indicate the upper Schematic area, or 8.23 gpm, which was not the intent.

We also recommend using our Verify Laterals tool after piping to your entire lateral system, much like you would do if you had laid out all the heads. The error checking works just as well on Schematic areas.

After you've placed your valves, and perhaps quick couplers or hose bibbs, you can draw your mainline pipe.

Don't forget to use our Verify Mainline tool to ensure that your mainline is properly connected to all valves and other equipment.

When you run an Irrigation Schedule, make sure that all the boxes under Valves/Equipment are checked.

Also check all the boxes under Schematic Areas. 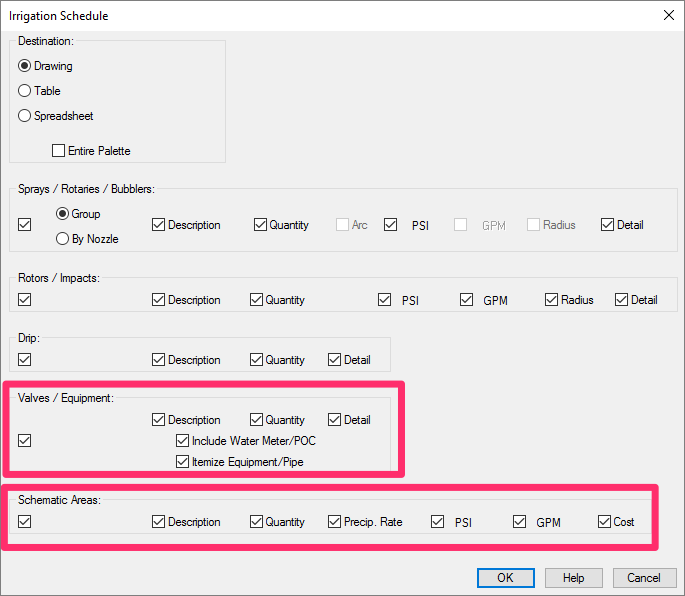 You can run any of the standard irrigation reports once you've completed the following steps: