Get the Latest Irrigation Blocks

You've placed irrigation symbols or callouts in a drawing, and you need to replace these blocks with our updated blocks – for example, the new equipment and valve callout blocks with background masks, which we created back in 2016.

If you've already placed the older version of a block in a drawing, that version will be defined in that drawing as representing the equipment or callout it's assigned to. If you place another instance of that block without having completed the steps on this page, you'll continue to place the old version. The steps below will show how to tell Irrigation F/X to place the newer versions of our symbol and callout blocks.

Because the blocks for valve callouts, valves, and auxiliary equipment are all relatively simple and don't require specific rotations or arcs, updating them is a straightforward process.

1. Navigate to the subfolder within the folder LandFX/Blocks/Graphics/Irrigation that contains the blocks you need to replace.

To update valve blocks, go to the folder LandFX/Blocks/Graphics/Irrigation/Valve. 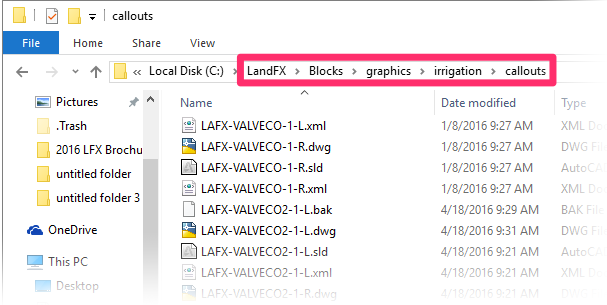 To update valve callouts, go to the folder LandFX/Blocks/Graphics/Irrigation/Callouts.

To update auxiliary equipment blocks, go to the folder LandFX/Blocks/Graphics/Irrigation/Equipment.

2. Delete all source files for the blocks you want to update. 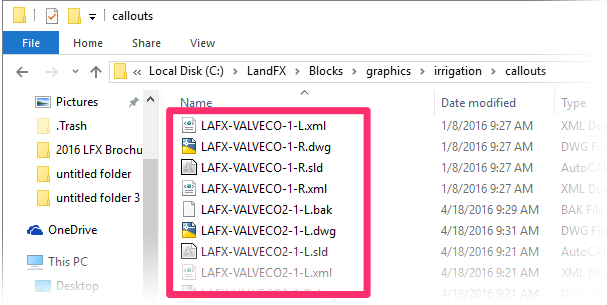 For example, if you're updating your valve callout blocks, delete all files whose names begin with LAFX-VALVECO or VALVECO from the folder LandFX/Blocks/Graphics/Irrigation/Callouts.

3. Open a new CAD file, and place each block you want to update. This step will automatically download the new blocks.

For valve callouts, remember to place both the left (L) and right (R) versions of the callouts.

Block placements for sprinkler heads are a little more complicated than their counterparts for valves, valve callouts, and auxiliary equipment.

Like valves and auxiliary equipment, heads will include a symbol block that depicts the head itself. However, head placements generally include an arc depicting the pattern and rotation angle of the head's water coverage. 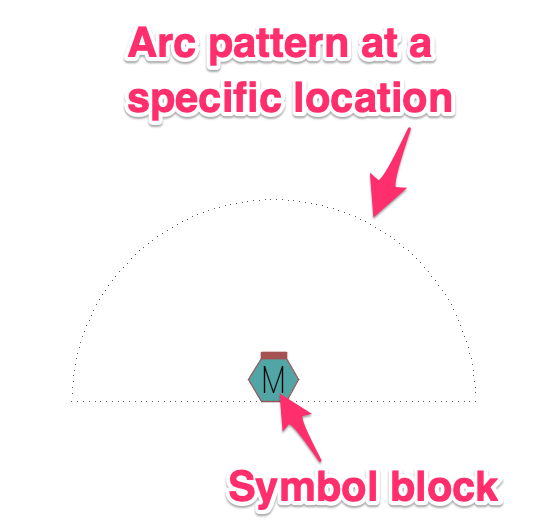 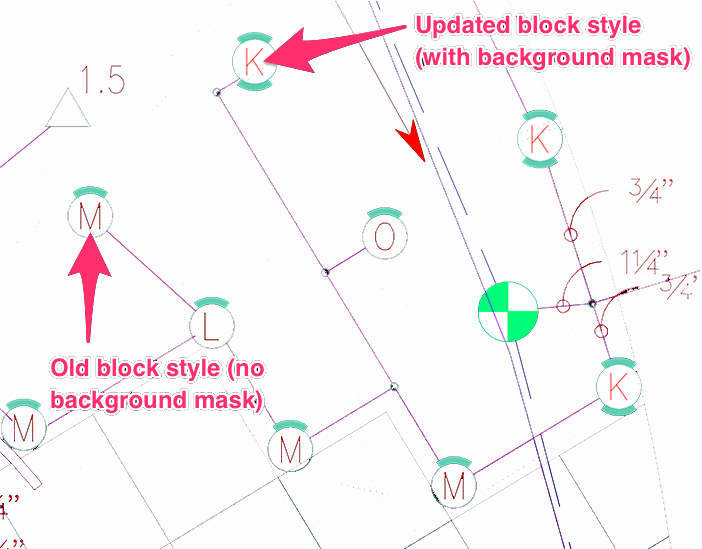 The drawing pictured to the left includes examples of the updated head blocks (which include background masks) and the older blocks (which do not).

In this example, we'll update the older blocks in this drawing to the newer versions with the background masks.

You may have both the older and updated block styles in an existing drawing if you've added multiple equipment models to your project but have only placed some of the models. As soon as you place a symbol block for the first time, you'll automatically download and place the latest version of that block. Thus, you might place one of the updated blocks in a drawing that also includes some of the old blocks.

1. Open the subfolder within the folder LandFX/Blocks/Graphics/Irrigation that contains the blocks you need to update.

For example, if updating rotor blocks, open the folder LandFX/Blocks/Graphics/Irrigation/Rotor.

Delete all files beginning with LAFX.

If you've customized any of the block source files in this folder, back them up to a secure location to avoid losing them. You can then move them back into this folder once you've downloaded all the new versions of our equipment blocks. 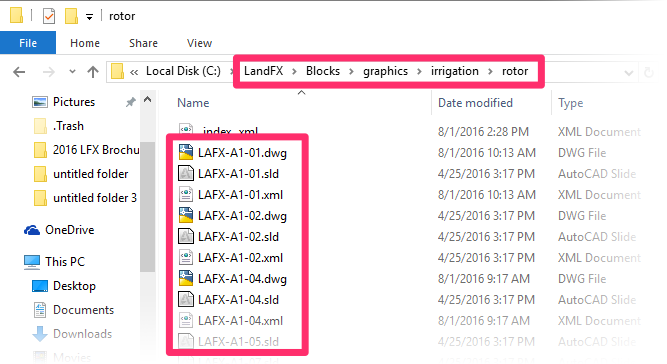 2. Back in your drawing, select any head with an old version of the symbol block.

type EquipInfo in the Command line 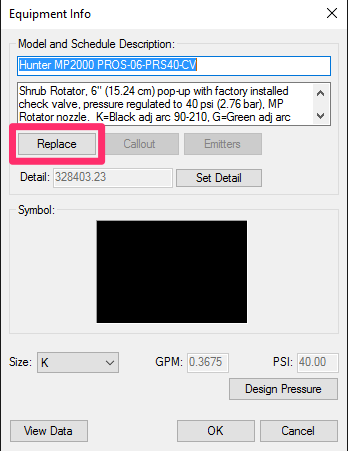 In this step, you're essentially replacing a head with the exact same head in your project. In doing so, you're downloading the updated symbol block and assigning it to that head.

5. Right-click on the same head in your drawing, and select the Block Editor option from the menu that opens. 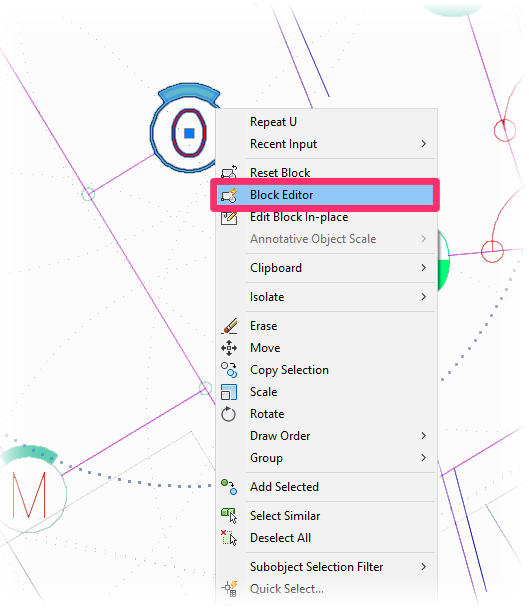 6. The Block Editor will open. Type RedefineBlock in the Command line and press Enter. Use the pickbox to select only the equipment symbol – not the arc. 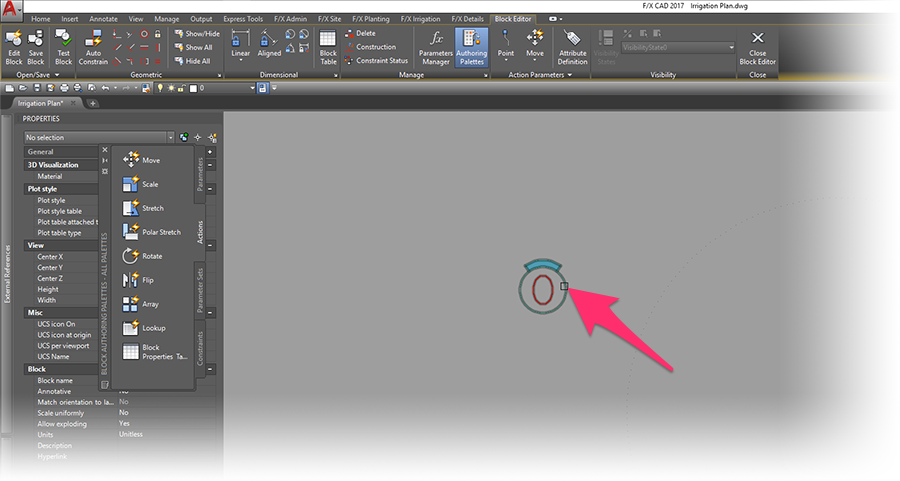 7. The updated block will replace the old one. 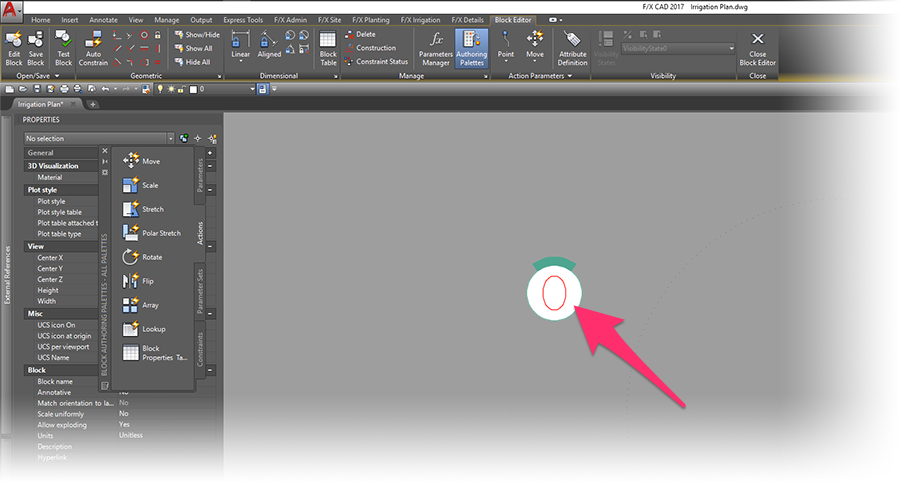 8. Close the Block Editor, and save your changes. 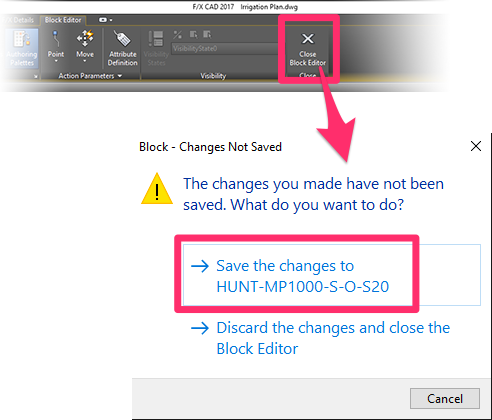 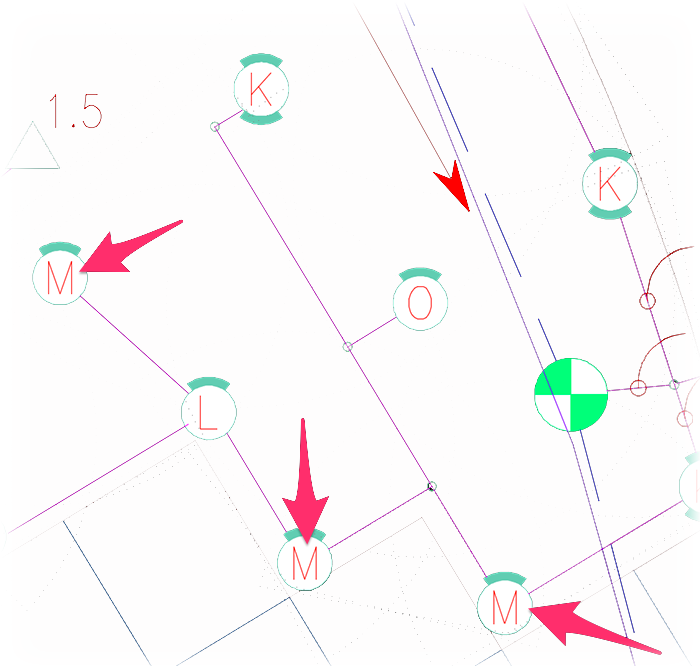 9. The updated block will replace all existing placements of that head in your drawing.

10. Repeat these steps for each of the other head types you need to update in your drawing.

Turning Off the Background Mask

Don't like the background masks after all? You can easily turn them off by turning off the layers that contain them. 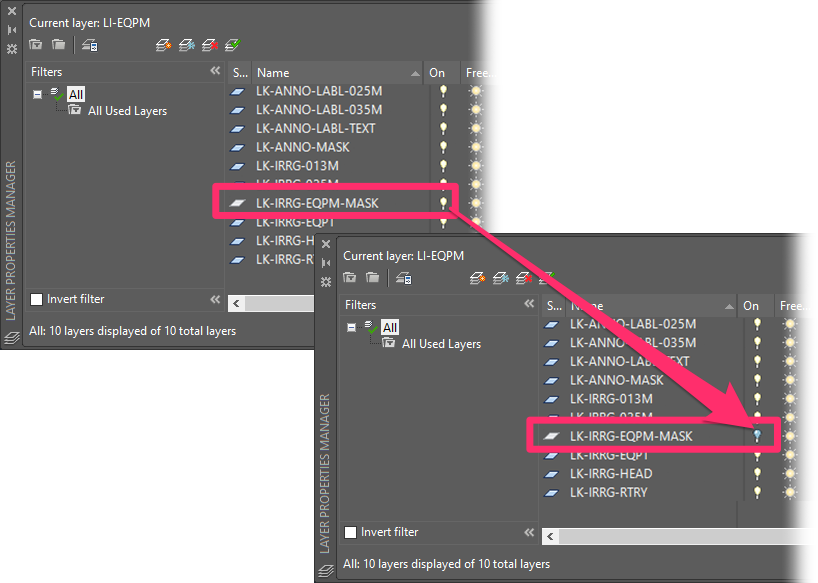 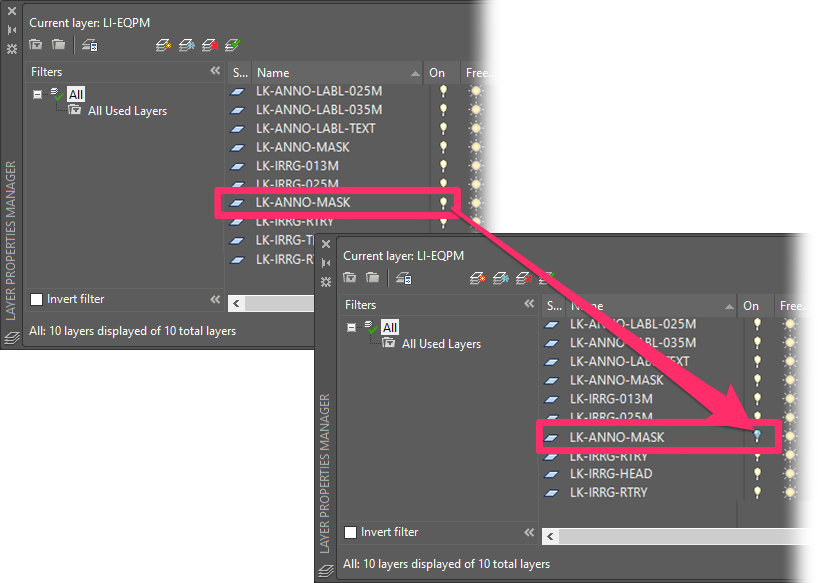