The Importance of Zooming to Extents

Aside from drawing cleanup, perhaps the most important step to take with a drawing you receive from a colleague, consultant, or client – or any drawing, for that matter – is to Zoom to Extents. You might be surprised at what you find.

This step, which literally takes seconds, shows the outer extents of your drawing – and shows you whether you are looking at an area that covers 500 feet, 500 miles, or 500 million miles. If your drawing contains an errant object placed excessively far out, you could be attempting to design a site that is half the size of the universe – without even knowing it! That's why you need to Zoom to Extents – or even use the EXTMAX command – and confirm that the values are within reason.

Why You Need to Zoom to Extents

In short, because you won't always be aware of every single object in your drawing. A civil could have mistakenly changed the scale and placed an object ridiculously far outside the logical scope of the site plan, for example. Even a single line placed beyond your view can create chaos in your drawing. This type of situation can wreak havoc on the scaling of any objects you attempt to place within the site. Other potential issues include:

In fact, several Land F/X function need to temporarily Zoom to Extents, in order to locate various objects. This step is necessary for all schedule functions, along with any function that needs to look at everything in the drawing, such as Verify Plant Labels, Verify Mainline, Recalculate Circuit Zones, Size Lateral Pipes, etc.

How to Zoom to Extents

This important command is incredibly fast and easy: Type ZOOM in the Command line, then type E for Extents when prompted.

Your view on the screen will zoom to show the outward boundaries of your drawing. What you see may surprise you.

The example below sjpws a drawing that's zoomed into what we think is the site plan in its entirety.

However, Zooming to Extents reveals a whole new and disturbing reality. Once we Zoom to Extents, the true outer limits of the drawing are revealed – the result of someone having drawn an errant line in the upper right corner of the drawing. 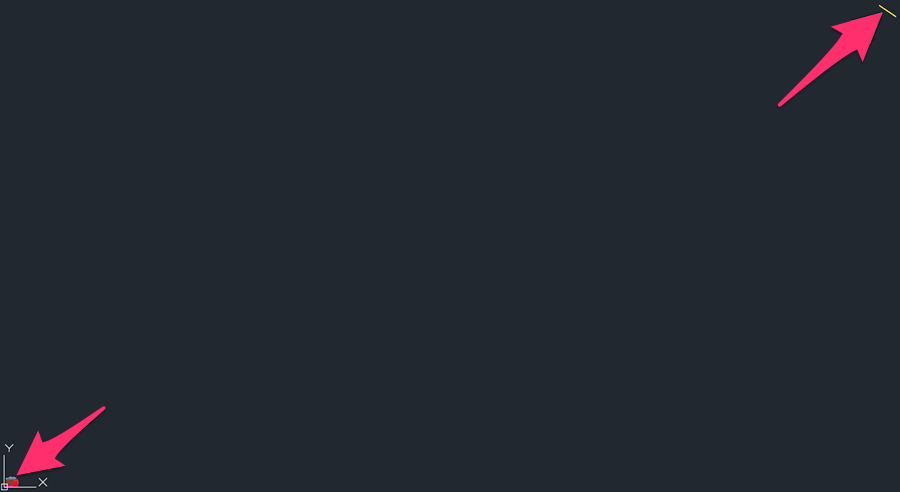 In terms of drawing scale, the line in this example is actually several miles away from the intended site plan, which in turn becomes a mere dot in the lower left corner of the drawing. It's often acceptable for an AutoCAD drawing to include a distance of several miles. However, It's also possible for a drawing to contain an errant line or other object that lies hundreds or even thousands of miles away from the intended site. If you think you're working within an area of a few hundred feet, this situation can cause utter chaos in your drawing if not corrected.

If we hadn't Zoomed to Extents, we could be experiencing any number of issues with our drawing. Fortunately, we found the culprit.

If you Zoom to Extents and encounter an unwanted object like the line in our example, you can correct the issue by deleting and purging the unwanted object(s) and correcting your units and scale.

Checking the Site Extents with ExtMax

Another quick way to check the limits of your design site is to use the EXTMAX command.

With your drawing open, type EXTMAX in the Command line.

The Command line will now tell you the physical extent of your drawing. However, note that the results can sometimes be cryptic. For example, you might see something like:

Bottom line: If you type EXTMAX and see an extraordinarily large number in the Command line (and you're not designing a site that covers a substantial portion of the universe), it's time to find your errant objects, then delete and purge.

Issue With Zoom to Extents and the Circuiting Tool

If you've attempted to Zoom to Extents in a drawing containing Irrigation Zones created with our Circuiting tool, you may run into a problem where Zoom to Extents cancels out and deletes your Zones. If this is the case, the issue is likely originating from an Xref in the drawing. Follow our steps to resolve this issue.