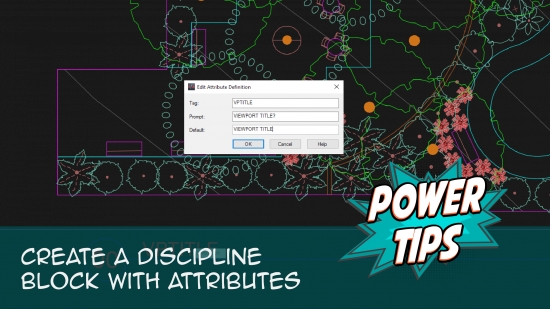 Your installation includes a number of default scale bar blocks to act as a scaling legend in your drawings. These "smart" blocks are configured to adapt to any scale you set in a drawing by displaying that scale. They will also include reference numbers for the scale tick marks in increments that make sense for your scale.

But what about if you need to work in a less nominal scale, such as 3/32"=1'? In this case, our default scale bars will display increments that make mathematic sense for that scale, but aren't necessarily round numbers. Here's an example:

Before you can configure your own scale block, you'll need to ensure that you have your scale set correctly in both the Plot Scale dialog box and in Paper Space, and that these scales match each other.

Open a fresh drawing, and set your scale and units in the Plot Scale dialog box using our Scale tool. 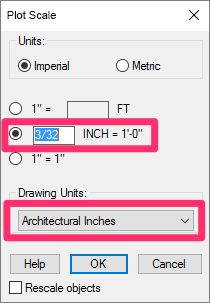 Also make sure your units are set correctly in the AutoCAD Drawing Units dialog box.

Now open Paper Space and set a scale that matches the scale you set in the Plot Scale dialog box. This step is extremely important, as you'll be toggling between Paper and Model Space to create your scale block.

In Paper Space, set your scale by selecting the appropriate option from the scale menu, pictured to the right.

The scale menu is available in the Status Bar toggles. 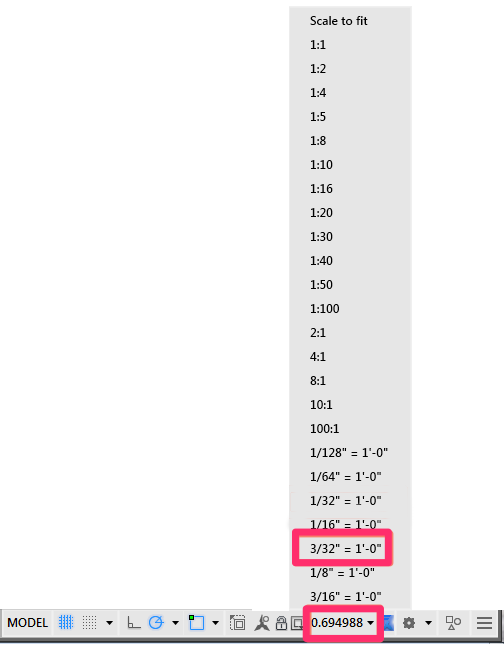 Now that you have your scale set correctly in both the Plot Scale dialog box and in Paper Space, you can begin working on your custom scale block. At this point, you have two options:

Option 1: Draw or Place Your Own Scale Bar

We offer the above-mentioned default scale bar blocks, so you won't need to draw a scale bar if the general appearance of one of our blocks works for you. To use one of the existing scale bars, open the Discipline Graphics dialog box and select the North/Scale option from the menu. For specific instructions on accessing this dialog box, visit our Discipline Graphics documentation section.

The North/Scale blocks include several scale bar blocks, all of which have names that start with SCALE-. In the image below, the first three SCALE blocks are meant for drawings with Imperial units, and the last three are meant for metric units.

Select a scale bar block, and place it in Model Space. 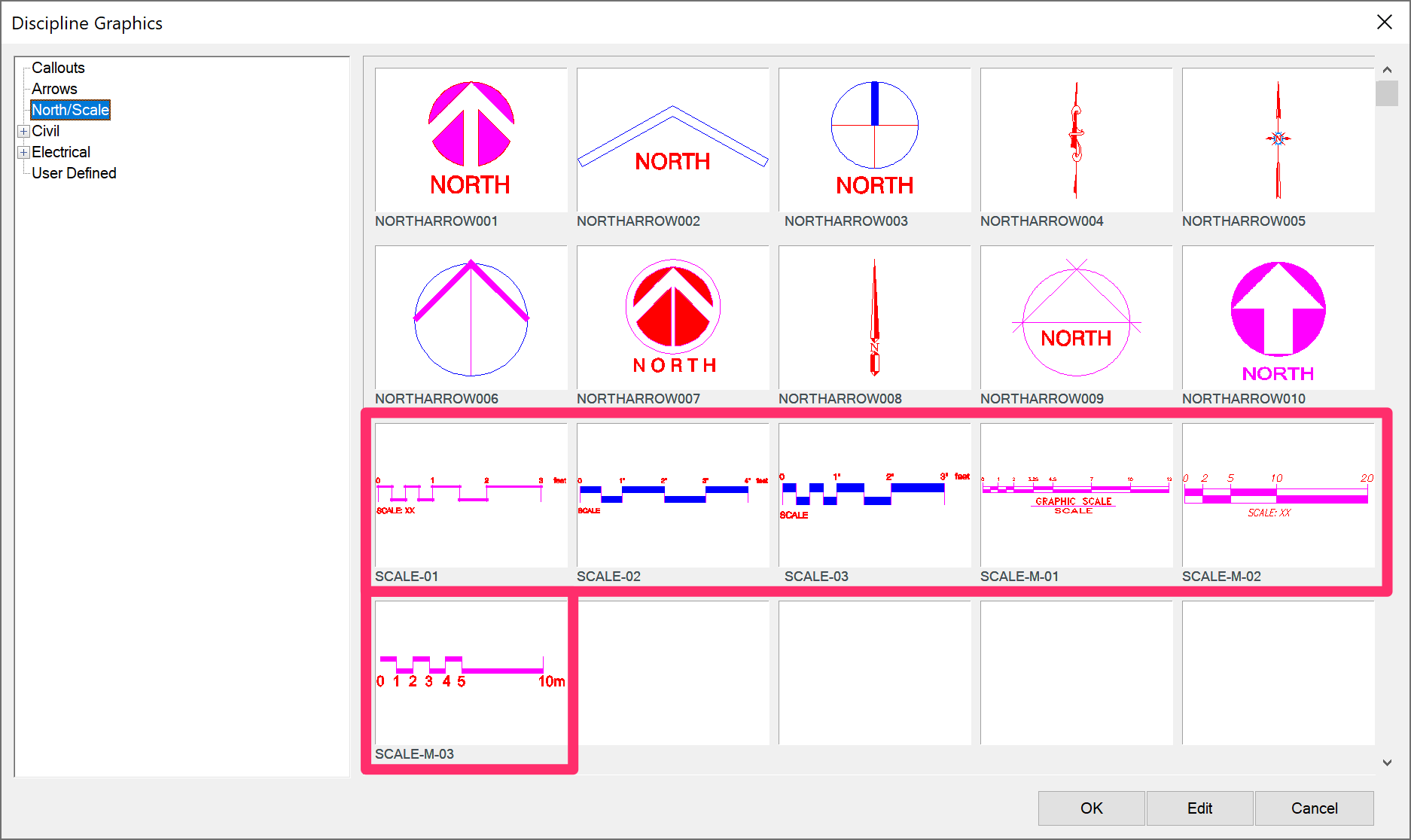 Whether you drew your own scale bar or placed an existing one, you'll now have a scale bar in Model Space. The next step is to match the scale bar to the scale you originally set for this new drawing. In our example, we set our scale to 1/32 inch = 1 foot.

We recommend turning on the CAD OSNAP function to complete these steps. OSNAP makes it easy to snap to specific points on your scale bar.

Draw a polyline originating from the bottom left corner of the scale bar. The Command line will prompt you to Specify next point. Extend the polyline straight out to the right, along the bottom of the scale bar. Rather than clicking to set the next point, type the first increment in feet, inches, or meters that you would like to appear above your scale bar. In our case, we want our scale bar to show increments of 10 feet. Therefore, we'll type 10' for the length of the polyline.

Press the Esc key to exit the polyline function. You will now have a horizontal polyline with the exact length of the first increment you'd like to set for the scale bar according to the scale you've set. In our case, we've drawn a 10-foot line. Note that our 10-foot line doesn't quite match the 10-foot length shown in the scale bar itself. That's OK – we're about to fix that.

Type Scale in the Command line. You'll be prompted to Select Objects. Select the scale bar block but not the polyline you drew, then press Enter.

The Command line will prompt you to Specify base point. Click the bottom left corner of the scale bar, where it meets the polyline.

You'll be prompted to Specify scale factor or [Copy/Reference]. Type R for Reference, and press Enter.

You'll be prompted to Specify reference length. Click the bottom left corner of the scale bar, where it meets the polyline.

You'll be prompted to Specify second point. Click the tick mark where you want to put the first reference number.

You can now resize your scale bar. Scale down so that the tick mark you set as your reference point meets the end of your polyline.

You can test the accuracy of your scaling by running the Distance command. Type DIST in the Command line, and press Enter.

The Command line will prompt you to Specify first point. Click the point where the beginning of your polyline meets the bottom left corner of the scale bar.

You will then be prompted to Specify second point. Click the point where the end of your polyline meets the first numbered tick mark of the scale bar.

The Command line will show the actual distance between the two points, which should match the length of your polyline as you drew it. In our case, our distance is 10 feet, which means we have scaled the bar correctly.

Now that you have your scale bar block scaled correctly, you'll need to change the reference numbers to match the actual distances they represent.

Your scale bar will now be exploded into its editable components. Note also that the tick reference numbers will change to 0, 1, 2, and 3, as pictured below, and the Scale will change to XX.

Now type DIST in the Command line, and measure the distance between the 0 and 1 ticks of the scale bar.

The Command line will display the actual distance between the two points in Paper Space. In our case, the distance is 15/16", or 0.9375 inches.

You can now edit the tick reference numbers on your scale bar to reflect the actual scaled distance between the ticks in Paper Space – the number you see in the Command line as pictured above.

These numbers are attributes within the exploded block. To edit one of these numbers, simply double-click it to open the Edit Attribute Definition dialog box (pictured below).

Enter the appropriate number in the Tag field.

When you click OK, the number you entered will appear at the first tick mark on your scale bar.

Save the Scale Bar Block into Our System

You can now save your scale bar into our system. With your exploded block still open in Paper Space, open our Save Block tool.

Once you've saved your scale bar block in this folder, it will be available in the North/Scale library, and you can place it in future drawings using the Discipline Graphics tool. In our example, we've saved our scale bar block under the name Scale-04. 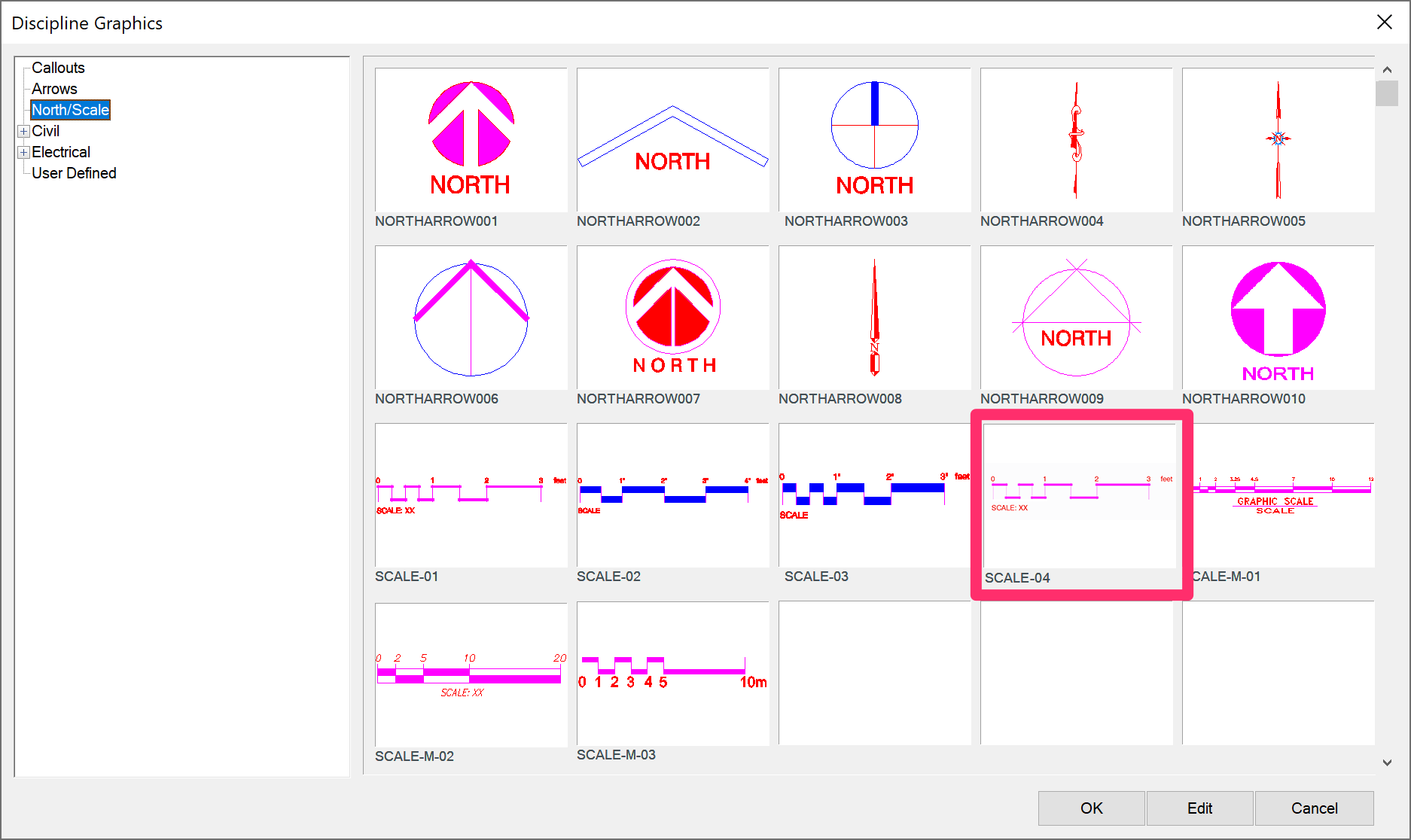 If necessary, you can shoot a better thumbnail slide for the new scale bar using the MSLIDE command. See our Thumbnail Slide documentation section for specific instructions.

Now, when you place your scale bar in a drawing of the same scale you set when you made it, the bar will display that scale, as well as tick reference numbers in the increments you set when you created it.

Remember: Customizing a scale bar in this way will only apply to the scale you use when you create the scale bar. If you want to use a custom scale bar in other drawing scales (such as 1/62" = 1', 1/8" = 1', etc.), you'll need to create a new scale bar specifically geared toward each scale you plan to use.