You received the following error message when attempting to place a hatch: "Error: The polyline selected contains arcs or segments."

Instead of a polyline, your error message may mention a line, polygon, circle, or another line-based object.

You may have received this error when trying to place a hatch for:

Polyline boundaries for irrigation areas cannot consist of arc segments. When you select a polyline with arc segments, the system does its best to decurve the polyline. Far superior to the blunt force method of the PEdit command's Decurve option, it attempts to represent the arcs accurately within reason, depending on the units of the drawing.

In addition, your area boundary may not be closed. All of our hatches (planting, site, and irrigation) require a closed polyline boundary. If your drawing does not include irrigation hatches, you are likely dealing with unclosed polyline hatch boundaries.

A Note on Curved Drip Area Polylines: When you place a drip area – whether for drip emitters or driplines – you are placing a hatch within a closed polyline area. Drip areas treat curved polylines uniquely, specifically because drip areas need to determine whether a pipe endpoint is within the area where you place them. Because the necessary math becomes wildly more complicated with curved edges, the system has to decurve boundary polylines when using them as drip areas. This is precisely why, when you place a drip area within a boundary that includes one or more curved polylines, the curved line will morph into a series of contiguous segments when you place the hatch.

If your drawing does not include irrigation hatches, skip to Step 2.

If this issue is occurring with a large number of polyline boundaries in your drawing, you can first attempt to reverse the direction of the polyline.

Select the polyline, then right-click it.

Select Polyline from the menu that pops up, then select Reverse from the sub-menu. 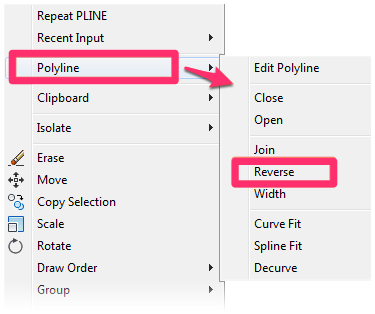 If your drawing does not include irrigation hatches, or if you're still getting the error after reversing the polyline boundaries, you can use the Boundary command to re-create the polyline.

Follow our steps to create a create a closed hatch boundary.

You can also try using the AutoCAD PEdit command and selecting the Decurve option to re-create your polyline. We would never wish this command on anyone, but of course it is there, and it can save more time than redrawing a polyline with only line segments.