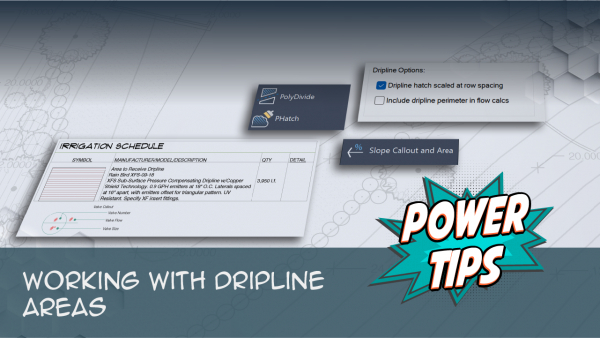 An Area for Dripline is intended for a planting area that will receive a grid pattern of either above- or below-grade dripline, which consists of poly pipe tubing with emitters built into the pipe at various intervals by the manufacturer.

Areas for dripline are represented by a hatch pattern and a dashed border outline.

Before you place drip irrigation equipment into your drawing, you'll need to select the equipment from our database and add it to your project. For more information, see our Add Drip Equipment to a Project documentation.

The default install does not include all symbols, but many of them will download on demand. If you go to place a head, the symbol should download as necessary.

Dripline spray emitters are either above- or below-grade multiple driplines laid parallel to one another. Generally, the spacing of the drip emitters on the dripline matches the spacing between driplines.

Draw a polyline (on any layer) around the areas that are to be irrigated with a dripline system.

Open the Area for Dripline tool: 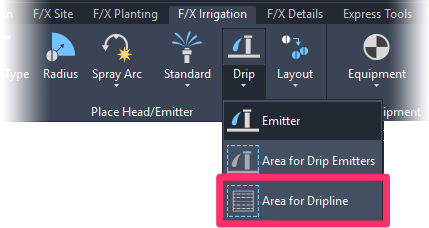 or type FX_PlaceDripLine in the Command line

You can also highlight the Area for Dripline in the Irrigation Manager and click Place. 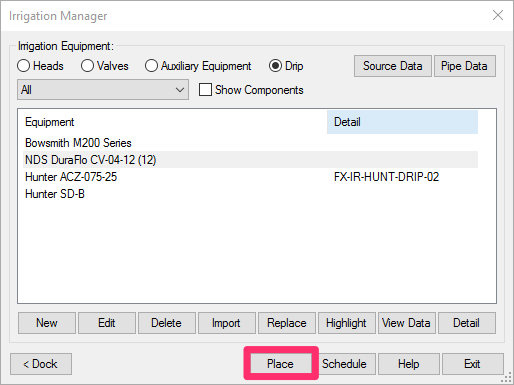 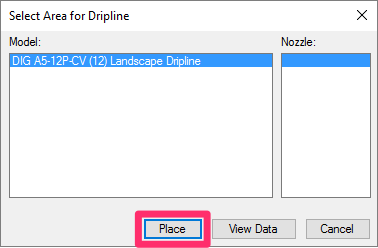 The Select Dripline dialog box will open. This dialog box lists all driplines you've added to your project. Select a dripline, then click Place.

If you used the Irrigation Manager to place your dripline, you'll skip this step.

The cursor will turn into a pickbox, and the Command line will prompt you to Select polyline to hatch, [Draw Multiple].

You can now place your Area for Dripline in an existing closed polyline area or:

If you type M for "Multiple," the cursor will change to a pickbox that will allow you to make a polyline selection. More information >

Select a closed polyline that represents the area intended for dripline. 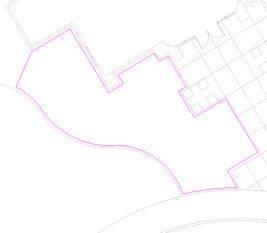 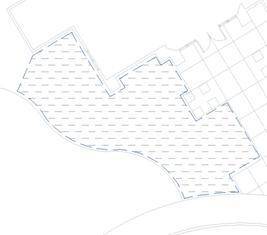 The polyline border will change to a dashed drip border area line, and a hatch pattern represented the selected dripline will be inserted in the area.

The hatch patterns will automatically differ depending on the type of dripline, as pictured to the right.

If you haven't yet drawn a polyline boundary for your Area for Dripline, you can do so "on the fly" after selecting the type of irrigation zone to place.

When you go to place an area, the Command line will prompt you to Select polyline or interior point to hatch, [Draw Multiple].

This feature works with all our hatch types, including:

In many cases, areas where you want to place dripline will contain objects that you want to exclude from the dripline hatch – such as benches, paths, or boulders.

To exclude these objects from the hatch, type M when placing the dripline area. 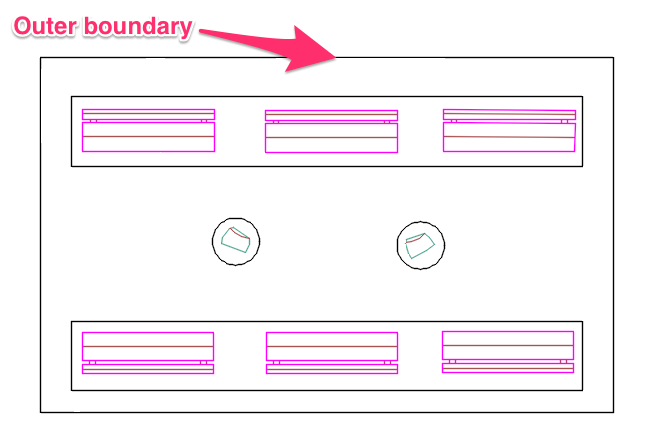 The cursor will turn into a pickbox, and you'll be prompted to Select outer boundary.

Use the pickbox to select the outer boundary of the area where you want to place the dripline.

Having issues placing your drip hatch using the Multiple command? Here's what to do.

You'll then be prompted to Select interior boundary.

In some cases, you may need to draw circles or rectangles around objects you want to exclude. 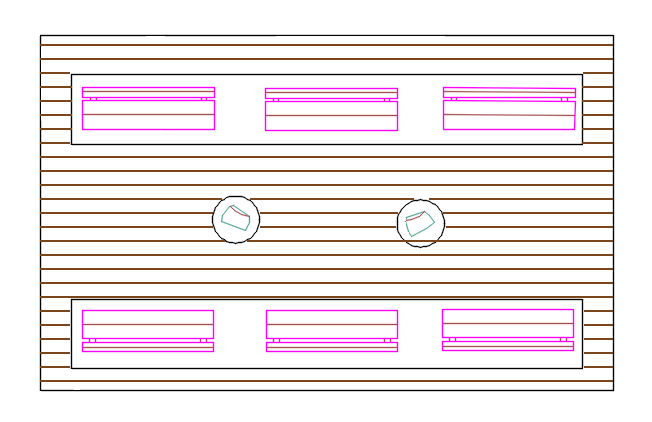 Once you've right-clicked or pressed Enter, the hatch will be placed and will exclude all the objects you selected.

Seeing this error message when trying to use the Multiple option while placing a dripline hatch?

Here's what to do.

We've added the option to scale your dripline hatches at the exact row spacing you've set for them. This option is available in the Irrigation Preferences.

Check the Dripline hatch scaled at row scaling option to scale your Areas for Dripline according to the row spacing you've set for them. 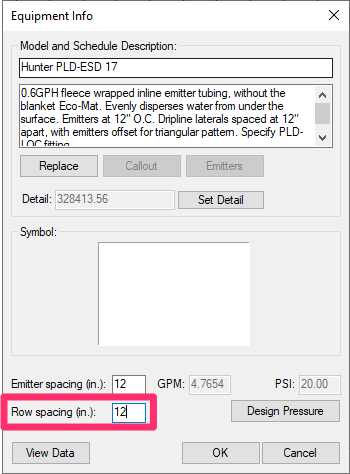 For example, if you've set your row spacing at 12 inches for a dripline area, that area will be scaled to reflect that 12-inch spacing when placed in a drawing if you have this option selected.

You can set your row spacing, as well as configure other options, for your dripline areas by using our Edit Equipment tool.

It's extremely important to avoid using arcs in your drip area boundaries. Here's why:

For drip areas, we need to be able to determine whether a point lies within any given area. This determination will in turn allow the software to see whether a freestanding emitter is part of that drip area, as well as for flush valves and pipe transition points. Because running the pipe sizing can require dozens and even hundreds of these crosschecks, all this calculation has to happen extremely quickly. So long story short: If the boundary path consists of all straight lines, it can be accomplished with a simple operation. If arcs were allowed, the system would need to convert each arc to a series of straight lines – each and every time. Or, failing that, it would need to convert every object to a 3D Region object, and use the Region modeler routines. But again, all of those are quite involved and tax the computer, as opposed to simply converting any arcs to straight lines when the drip area is initially placed.

If you've already added a particular Area for Dripline to your project – even if you've already placed it in a drawing – you may want to change its hatch to another one of our default hatches, or a version you've created. See our documentation on changing symbols for Areas for Dripline and Drip Emitters.

After placing your dripline areas, you'll need to take some specific considerations into account when piping to them. See our PIping to Drip Areas documentation.

Issue: Your drip hatches are not showing up in Paper Space

Issue: You are unable to pipe or connect to an Area for Dripline

Issue: You're trying to place an Area for Dripline, but the dripline hatch is solid rather than taking on the correct pattern

Having another issue with placing an Area for Dripline? See our Place Drip Emitters Troubleshooting section.

Issue: Error: File ... .dwg Was Created by an Incompatible Version of AutoCAD when placing areas for dripline

Issue: You're trying to use the Multiple command to exclude interior areas from your dripline hatch, but the command is not working properly

Issue: Your dripline hatch is either too dense or not dense enough (that is, the lines are too far apart, or you're not seeing lines within it at all and it's either empty or completely solid

Issue: You need to remove the hatch from internal objects within a drip area Issue: "Cannot process multiple boundaries because the outer polyline includes loops" error when trying to use the Multiple option to exclude interior objects from a hatch Issue: Your drip hatches are showing up incorrectly, or as random lines or solid colors
Print