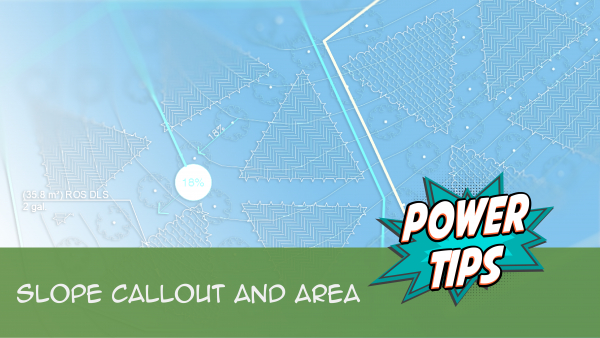 You can use our Slope Callouts tool to place callouts that show the direction and percentage or ratio of slopes in your drawing. You can also use this tool in conjunction with our Spot Elevation tool to call out the slope between two existing elevations.

In addition, we've built the Slope Area feature into this tool. With Slope Areas, you can apply a specific slope to closed polyline regions in your drawing. Any smart objects (such as plants, RefNotes, or irrigation equipment) represented by hatches that lie within Slope Areas will be recalculated to reflect the slope.

or type FX_PlaceSlopeCallout in the Command line

The cursor will turn into a pickbox. The Command line will prompt: Arrow Point, or select slope dimension or first spot elevation.

You have several options at this point:

To place an arrow point manually, just click to place the callout arrow. You can then use the mouse to orient the callout, and then type the slope percentage in the Slope dialog box.

Select the arrow point location, then adjust the orientation of the Slope Callout.

Type the slope percentage in the dialog box. 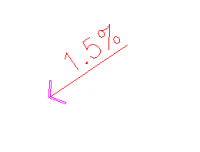 The Slope Callout will be placed.

The cursor will turn into a pickbox when you open the Slope Callout tool. Use the pickbox to select one of the slope dimension lines that appear when you place Spot Elevations in relation to each other.

Use the pickbox to select an elevation "dimension line." 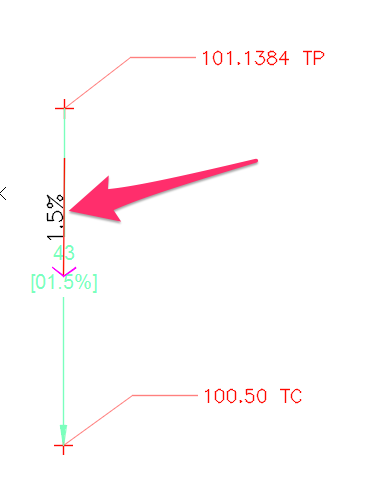 A callout of that slope will appear along the line.

Because the dimension line is non-plot, it won't show up when you plot. 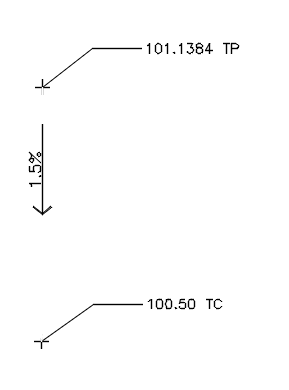 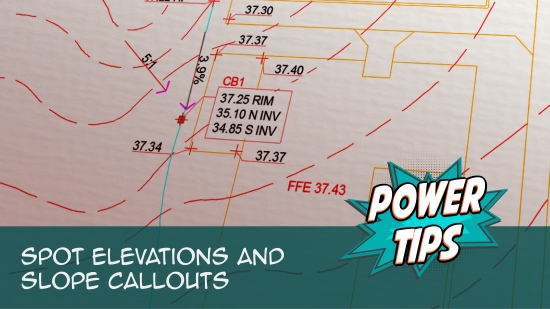 The Slope Callout will be placed between the two.

When calculating a slope, note that if you select a Spot Elevation callout that lists multiple elevations, the system will use the Point 1 elevation for the calculation.

A Slope Area takes the grade percentage or ratio of an existing Slope Callout and applies it to a closed polyline area in your drawing. Objects represented by any smart hatches within that polyline will have their quantity, volume, or area recalculated based on the slope.

You can either draw Slope Areas on the fly or select the boundary of an existing smart hatch to convert it into a Slope Area. This feature can be applied to smart hatches representing objects such as:

A region's slope directly affects the amount of actual ground covered by that region. For example, if you have two regions – one sloped and one flat – that appear identical in size and shape from plan view, the sloped region will always be larger. When you create a Slope Area, all smart hatches (not blocks) within it will be recalculated to account for increased square feet or meters resulting from the slope percentage or ratio in that area, usually resulting in a larger quantity or amount. In the case of dripline areas, the flow will also be adjusted according to the increase in dripline and emitters.

Note that Slope Areas will not affect drip emitter areas, pipe lengths, or anything represented by blocks, such as individual trees or shrubs, site amenities, or irrigation components aside from dripline areas.

To create a Slope Area, open the Slope Callout tool. The cursor will turn into a pickbox. Use this pickbox to select an existing Slope Callout you want to use in creating the area. The percentage or ration expressed by that callout will be applied to the entire Slope Area.

In this example, we'll select an existing Slope Callout showing a slope percentage of 38.9%.

After selecting a callout, you'll be prompted in the Command line to Select polyline, or [Draw]:

You can either select an existing polyline area in your drawing to convert it into a Slope Area, or type D to draw the Slope area on the fly. In our example, we'll type D and then draw a closed polyline area that will become our Slope Area. 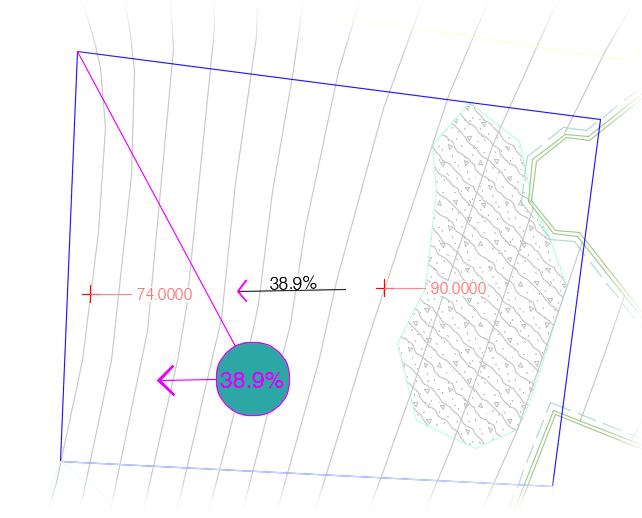 After you've selected or drawn your closed polyline, it will convert into a Slope Area and will contain a Slope Area Callout indicating the slope that is now applied to the entire area. The callout will mimic the slope direction of the Slope Callout you selected while also showing its same slope and will insert at the geometric center of the Slope Area.

In our example, the 38.9% slope expressed by the Slope Callout we selected will now apply to the entire Slope Area. For example, the plants in the groundcover hatch within the area will now be recalculated based on that slope when we label those plants or place a Plant Schedule.

Note that Slope Area Callouts will be nonplot by default, meaning they won't show up when you plot your drawing. If you want to see these callouts in your plotted drawing, you can select them and either change their layers to plot or move them to layers that are set to plot.

How Slope Areas Interact With Other Land F/X & AutoCAD Tools

We've integrated Slope Areas into a number of other Land F/X tools in the following ways:

Slope Area Callouts look like the one pictured above by default. If you want to customize their appearance, you can edit their source files in the folder LandFX/blocks/graphics/callouts.

If your Slope Callout text is coming in too big or too small in relation to the rest of your drawing, you're most likely facing a scaling issue. If this is the case, follow our steps to correct scale in callouts.

If you want to make permanent changes to the size or scale of the entire Slope Callout as it inserts in your drawings, you can do so by editing the Slope Callout source blocks.

Issue: Spot Elevations and/or Slope Callouts are oriented incorrectly or pointing in the wrong direction

Issue: You placed a Slope Callout inside a Work Area with a UCS assigned to it, and the callout aligned to that UCS rather than to the WCS

Issue: Your Slope Callout arrows are hollow, not solid, or displaying as lines only

Issue: You received an Invalid Input error when attempting to place a Slope Callout<